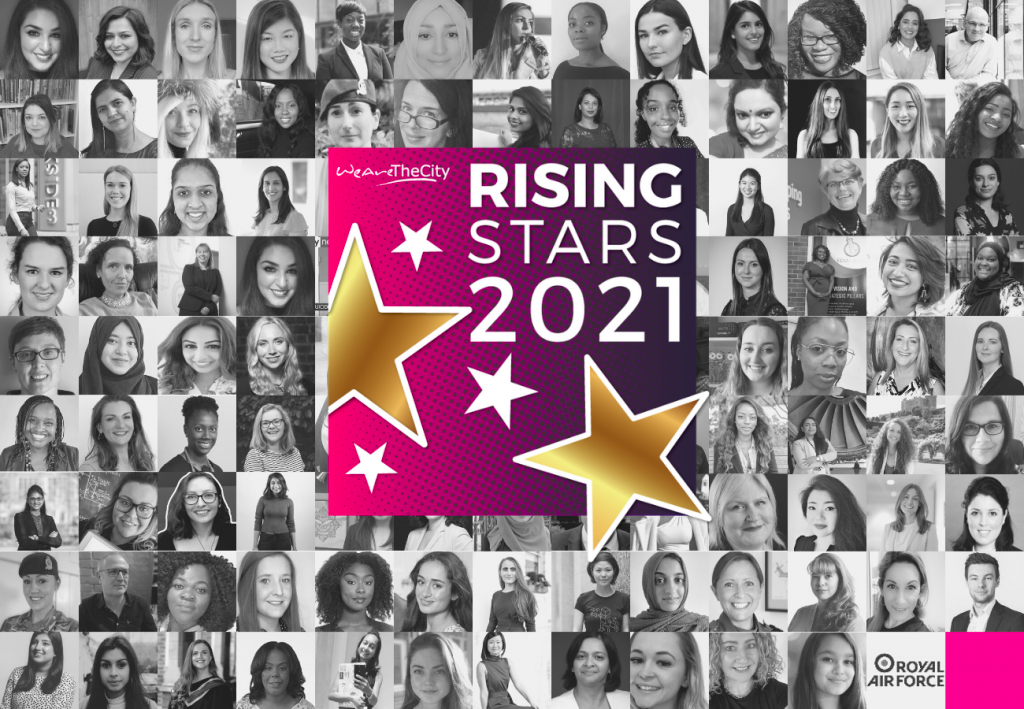 WeAreTheCity are proud to announce the winners of our 2021 Rising Star Awards.

Now in its seventh year, the Rising Star Awards were introduced to showcase the UK pipeline of female talent below management and to create 100 female role models across 20 different industries and professions.

The awards also include a Company of the Year prize, awarded to the Royal Air Force. The Royal Air Force was formed in the crucible of the First World War and for over a century has been constantly dedicated to serving the needs of the Nation both in times of peace and conflict.

The awards also recognise five Rising Star Champions, who are actively supporting the progression of women in the workplace. These include Maysoon Shafiq, Founder and Director of Al Mu’Minun (The Believers), a non-profit organisation dedicated to serving the youth through open spaces of spirituality, dialogue and empowerment; and Bernadette Thompson, Deputy Director for Inclusion, Wellbeing and Employee Engagement in the Ministry of Housing Communities and Local Government (MHCLG); a notable diversity advocate and public speaker, working with leaders across government and the public sector to drive a culture of inclusion and increase the pace on representation of Black and Minority Ethnic employees particularly at more senior grades.

New for this year, we are also celebrating women around the world with our Global Award for Achievement.

This year’s winners include Anju Gurung, who is an Associate Civil Servant for the British Gurkas Nepal; Isabella Gomes, who is currently freelancing as a Coronavirus frontline reporter for the Baltimore Sun; and Brigadier General Ishrat Rafique Eshita, who is the Deputy Chief Intelligence Officer, IPC – Global Command of the International Police Commission. She is also the Country Chief Bangladesh of Counter Crime Intelligence Organization.

We are also celebrating Men for Gender Balance, which celebrates senior men who are championing women and gender balance either inside or outside their organisation. Amongst the winners for this year are Gary Ford, Director, Moonshot Consultancy, who is a Male Allies advisor for Women on the Wharf and provides keynote presentations or run workshops on creating male ally groups; and Peter Palmer, Trustee and Director (Voluntary) S.E.E.D (Support and Education for Eating Disorders Lancashire).

Alongside the Rising Star categories, Rising Star Champion award, Men for Gender Balance award, and Company of the Year award, we are also pleased to announce the winners of the Editor’s Choice award.

Those receiving the Editor’s Choice award are individuals who have been specifically selected by the leadership team at WeAreTheCity and one independent judge. This award recognises their outstanding contribution and tireless efforts towards gender equality, both in the workplace and across wider society.

The awards were entered by over 1,000 individuals and were judged by a panel of 51 independent judges. Over 40,000 public votes of support were received for the 200 shortlisted nominees from 115 countries.

WeAreTheCity are taking a cautious approach to the COVID-19 pandemic and safety is paramount, so we will once again be hosting a virtual award’s ceremony.

This is an opportunity for our winners, judges, sponsors, and supporters to get dressed up, join us on Zoom and virtually receive their awards from our sponsors. It will also enable our winners to invite a few others along to the ceremony so they can see them being recognised for their achievements!

Over the course of the award’s ceremony, our winners will hear from inspirational speakers and entertainers who will all be endeavouring to create a truly magically experience.

Watch our 2020 award’s ceremony below:

These awards are critical to celebrate and showcase incredible talent across multiple industries in the UK, something that is particularly important during these challenging times. Diversity and inclusion is more than just a value at RBC, it’s our strength, and it’s one of the ways we bring our purpose of helping clients thrive and communities prosper to life.” 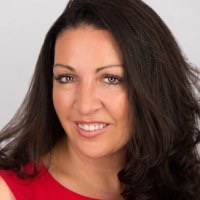 Vanessa Vallely, Managing Director, WeAreTheCity added, “I am so proud that for the seventh year running WeAreTheCity has been able to shine a light on the achievements of so many remarkable women across the UK. Our 2021 winners join a phenomenal alumni of 550 previous winners who continue to soar, both professionally and personally. I am ecstatic to welcome our 2021 winners to the WeAreTheCity family and to watch them progress in to the senior positions they so rightly deserve.”

Once again, we would like to congratulate all our winners and extend a sincere thanks to everyone who supported Rising Stars during 2021.