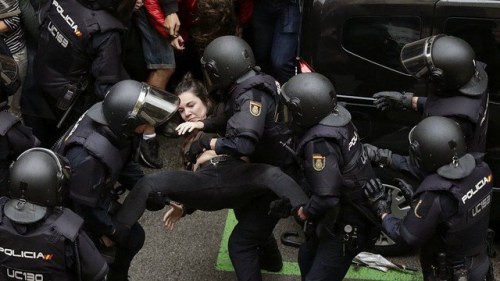 Women have been beaten and “sexually assaulted” while trying to vote in Spain’s Catalan Referendum.

Footage from the referendum has also shown women being pulled from polling stations by their hair.

The Catalan Referendum was set by the Government of Catalonia and called for independence from Spain. However, under the Spanish constitution, the referendum is illegal and opposition parties have called for voters to boycott the election.

The Spanish police have been heavily criticised for their use of force throughout the election. Police have arrested high ranking Catalonian officials and searched a number of printing houses looking for ballot papers and boxes. 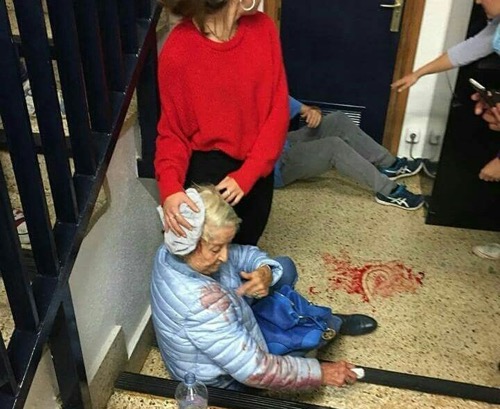 The police presence sparked a number of protest demonstrations across Catalonia. Nearly 900 people have been left injured after clashing with Spanish police. Voters were beaten with batons and violently dragged away from polling stations.

Police fired rubber bullets into the crowd and have forcibly removed ballot boxes and voters from polling stations. 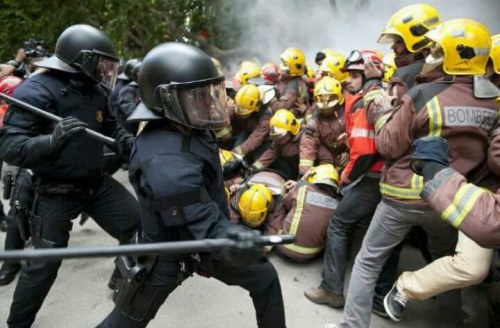 One woman, Marta Torrecillas, was filmed being violently removed from a school being used as a polling station in Barcelona.

In a WhatsApp recording to a friend called Laura, which was later released to the Spanish press, Torrecillas said, “I was defending elderly people with open arms.”

“That’s all I was doing, defending elderly people because they hit children and the elderly.”

“They got hold of me and threw me down the stairs and threw things at me.”

“They broke my fingers deliberately, one by one.”

“Halfway down the stairs, with my clothes up, they touched my breasts while they laughed and hit me.”

She continued, “Tell them Laura, tell them what’s they’re doing. I want everyone to know.”

“They have broken the fingers on my hand one by one deliberately.”

“That is real evil, real evil.”

In the last few hours, Catalonia has declared independence from Spain after 90 per cent voted yes in the referendum. Over 2 million votes were cast in favour of independence.

In a statement, First Minister Carles Puigdemont said, “The Catalan government will transmit to the Catalan Parliament, the seat and expression of the sovereignty of our people, the results of the referendum, so that it can act according to that laid out in the referendum law.”

“Catalonia has won sovereignty and respect and its institutions have the duty to implement that result.”

Alison is the Digital Content Editor for WeAreTheCity. She has a BA Honours degree in Journalism and History from the University of Portsmouth. She has previously worked in the marketing sector and in a copywriting role. Alison’s other passions and hobbies include writing, blogging and travelling.
Previous PostIn the age of flexible working, why are we still so stressed?Next PostEmployee productivity averages under three hours a day, survey finds