On the subject, Mary Robinson, UN Special Envoy for climate change said in the United Nations Sustainability document: Resilient People, Resilient Planet, “empowering women yields tremendous benefits for households, communities and the global economy. Closing the gap between male and female employment rates would boost GDP by 9 per cent in the United States of America, 13 per cent in the Eurozone and 16 per cent in Japan.” Recently, the leader of the Women’s Equality Party presented a cheque at Downing Street to show how much is being lost to the economy through unlocked female potential. The £50 billion gained might help to plug the Chancellor’s gap.

Harini Iyengar, a Women’s Equality Party candidate for the Greater London Authority said, “I do believe that, when we have equal numbers of men and women, it changes the culture”

Harini Iyengar continues, “The effect of all these austerity cuts, upon women, has not been properly considered. When you have a law, made by similar kinds of men of similar social class, having them then consider it in Parliament – again the same kind of people, in Committee, and again in the High Court – is not the same as representing women‘s diverse interest in the political process itself.”

The former president of Ireland and United Nations High Commissioner for Human Rights, Mary Robinson also points out that, “Women are also at especially high risk of unemployment: in developing countries, women have been more affected by the current economic crisis owing to their large share of export-led factory jobs and employment in service industries, sectors that have fared badly during the recession. Furthermore, women’s informal work is not visible in national labour force statistics.”

Having more women on boards is not just about financial success. A more diverse board brings other benefits, adds different perspectives. According to Sylvia Anne Hewlett, founder of the Centre for Talent Innovation, it is about the power of difference. They want to empower others and in doing so increase their own empowerment and gain fulfillment. She has done the research, and she has the data.

In Norway, the women with multiple boardroom jobs have been dubbed “golden skirts”. This was due to a dramatic surge in the number of female directors, which rose from six per cent to 40 per cent in six years as a result of quotas. That was five years ago.

The former head of the Law Society, Lucy Scott-Moncrieff suggested that some law firms had promoted ‘mediocre men’. She said, “If career progression was based on pure merit, some male business leaders and law firm senior partners would never even have seen the paintings on the boardroom wall. This is damaging to the organisations which lose what women have to offer, as well as disappointing for the talented women who lose out.”

She argues that, “The last thing we want is tokenism.”

“I think we need a massive shock to the system so I am 100 per cent in favour of quotas for the FTSE 100 companies. I know this is deeply unpopular with many, but I think it is the only way to create scale change fast.”

“I reject the assumption that with quotas comes sub standard women – that is patronising and sexist.”

City Eye became interested in Overlooked and Overshadowed women, both in contemporary times and through out history. The former would include the women passed over for the Nobel in favour of their male colleagues. The later would be the wives of famous men, such as Mrs. Mandela. Her study of women written out of history, led her to interviews with interesting and inspirational women, (and some men). Extracts will be published in the articles. In no way is this men versus women, as to who is better. Simply that an overly macho, military, testosterone fueled environment, mainly men, needs the balancing attributes, often, though not exclusively, assigned to women: caring, conciliation, communication. Find out more: City Eye Blog ©christina ionthecity.wordpress.com
Previous PostFour out of five children think banking is for men and nursing for women, new study revealsNext PostThe Gherkin Challenge 2016 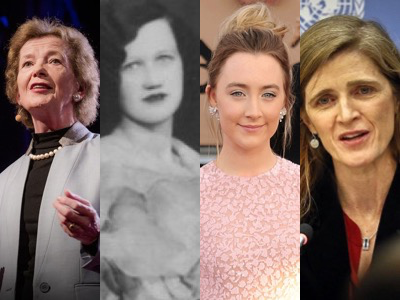 Inspirational Irish women you should know about