0
You have 0 items in your cart
Go To Shopping
Home > News > Current Affairs for Women > “Women are a very untapped, unserved source” | Debbie Wosskow reveals how the sharing economy could tap into the female resource 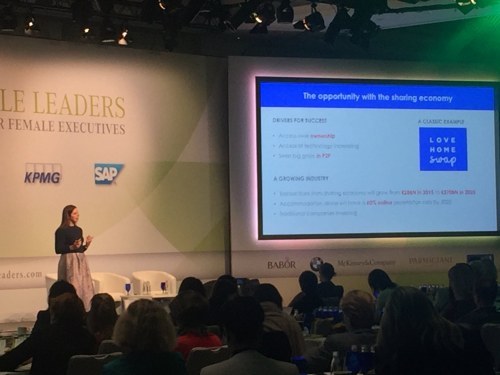 One thing that Debbie Wosskow, founder and CEO of Love Home Swap, is passionate about is female founders and helping more women achieve their goals as entrepreneurs.

Despite this, Wosskow highlights that while one in ten women say they want to start their own business, they don’t.

“One in ten women say that they want to start a business but don’t.”

“So what is holding them back?”

Wosskow goes on to suggest that the reasons for a lack of female entrepreneurs could be down to three factors – confidence, skills and their networks.

She continued, “We come across it time and time again, whether it be standing on a stage or pitching a business, women don’t have the confidence.”

Speaking about the networking opportunities for women, she said, “How can we build the equivalent of the ‘old boys club’ for women?”

Both building strong networking environments and entrepreneurship is in Wosskow’s blood. Alongside being the founder of Love Home Swap, Wosskow is also the co-founder and chairman of Allbright, a unique UK funding platform designed to provide the support and finance needed for female-led businesses to launch and scale.

She describes her journey into entrepreneurship as a natural process, following in the footsteps of her matriachy.

She said, “My mother is a successful entrepreneur and my grandmother ran a chain of successful sweet shops, so I’m from a background of that’s what women do.”

Love Home Swap allows people to swap their homes and travel the world in the comfort and style that they want. Wosskow desribes it as, “a bit like Airbnb for grown-ups.”

While the idea of swapping homes is nothing new, the sharing economy is on the rise, with an influx of companies like Airbnb, Coachsurfing, Uber and fiverr. Wosskow highlights that transactions from sharing economy will grow from 288 billion in 2015 to 570 billion in 2025. Technological advances are only making it easier and more accessible than ever before.

Wosskow also suggests that traditional companies are beginning to invest in the sharing economy. She said, “People want to sweat their assets more.”

“Start-ups are impacting the way that big companies are doing business.”

Wosskow believes that this sharing economy could create perfect opportunities for women who want to start their own businesses.

She said, “For many women, it’s a journey of being employed, self-employed and employing and the sharing economy is allowing women to do it in a way they never could before.”

“It allows women to work in ways that people didn’t view as work before.”

Alison is the Digital Content Editor for WeAreTheCity. She has a BA Honours degree in Journalism and History from the University of Portsmouth. She has previously worked in the marketing sector and in a copywriting role. Alison’s other passions and hobbies include writing, blogging and travelling.
Previous Post09/09/2017: Make every mile count this September and help to protect women from gynaecological cancersNext PostThink about your chair!