0
You have 0 items in your cart
Go To Shopping
Home > News > Current Affairs for Women > #WomenBoycottTwitter: Women boycott Twitter in protest of female voices being silenced 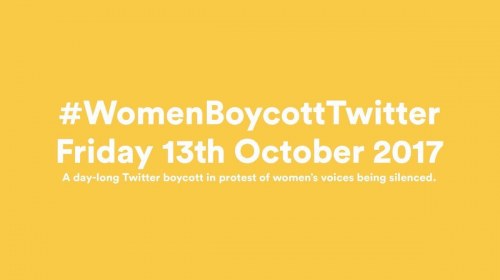 Women are boycotting Twitter in protest over female voices being silenced.

In light of Harvey Weinstein’s sexual harassment allegations, McGowan has been a vocal supporter of those who had accused Weinstein, after she herself alleged abuse from the film producer.

On Twitter, she has been urging people to speak out against Weinstein and sexual harassment. She has also alleged abuse claims at other men in Hollywood.

However, on Thursday 12 October, McGowan’s account was ‘limited’ for violating its rules, which prevented her from tweeting, retweeting and responding to tweets. She was still allowed to send direct messages and read Twitter.

The idea to boycott Twitter was first suggested by Kelly Ellis, who tweeted that the boycott would be, “in solidarity with Rose McGowan and all the victims of hate and harassment Twitter fails to support.”

Many celebrities and high profile names have also come out in support of McGowan and sexual abuse victims, including Chrissy Teigen, John Cusack, Alyssa Milano, Sarah Hyland and Mark Ruffalo.

The boycott started at midnight in New York and will last the whole of Friday 13 October.

Twitter has responded to McGowan’s suspension, stating that she was temporarily locked due to one of her tweets including a private phone number.

They said, “We have been in touch with Ms. McGowan’s team.”

“We want to explain that her account was temporarily locked because one of her Tweets included a private phone number, which violates of our Terms of Service.”

“We will be clearer about these policies and decisions in the future.”

“Twitter is proud to empower and support the voices on our platform, especially those that speak truth to power.”

“We stand with the brave women and men who use Twitter to share their stories, and will work hard every day to improve our processes to protect those voices.”

Alison is the Digital Content Editor for WeAreTheCity. She has a BA Honours degree in Journalism and History from the University of Portsmouth. She has previously worked in the marketing sector and in a copywriting role. Alison’s other passions and hobbies include writing, blogging and travelling.
Previous PostInspirational Woman: Annoushka Ducas MBE | British jewellery designer and founder of Links of London & AnnoushkaNext PostFinance companies losing £130bn by not appealing to women