It’s late, you’re still in the office at Marks and Spencer, still in a dead end job, still in a man’s world and nobody will give you a break.

Exhausted, you take the lift to go home. And who should walk in… is it David Beckham? You’ve lucked out. What was he doing at Marks and Sparks? By the time you’ve reached ground level you’re on your way to the top.

But it’s a great shame that I don’t have them physically because if I did I could go the commercial route of the company and achieve my dreams.

In your dreams? Well, ask Kim Winser, former M & S trainee. While her old company is in the headlines for plunging profit lines, Kim Winser is in the limelight with the launch of her own fashion outfit, and a top drawer reputation as an alpha businesswoman.

“I have the “determination gene” she says. “And balls.”

As a young woman, keen to flex her commercial muscle at M&S and a prized place on the Board, she was told three times not to bother applying. Take the HR route she was told.

Then, on her way home one night, she got into the lift, and the deputy director of the board walked in, recognized her, and congratulated her success of her part of the business. How come it’s doing so well, he asked?

“I’m happy to take risks and I’m told I have balls.”

“But it’s a great shame that I don’t have them physically because if I did I could go the commercial route of the company and achieve my dreams.”

The next morning she’s interviewed and appointed to the board. So where does David Beckham come in? Well, Kim Winser (now OBE) went on to turn the fortunes of the dowdy Scottish fashion company Pringle.

As luck would have it, David Beckham, out window shopping in London, bought one of her new range sweaters and wore it to his big book launch. Result, Pringle is suddenly a cool brand, splashed all over the globe. Kim Winser hailed a star businesswoman and new best friend of David and Posh.

So in a way David Beckham did walk into that lift, it just didn’t look like him at the time.

There are now five women on the board at Marks and Sparks, not before time. Annie Burns is a writer, producer and director with years of experience in television and radio. She started in newspapers, joined ITN’s News at Ten, C4, and then the BBC as an Editor in news and current affairs. She’s filmed all over the world on international affairs, reported from war zones and regions of conflict, and made numerous secret investigative films. She produced top names in broadcast media, and loved getting back to the studio to do the “And finally spot on the news as a bit of light relief.

Today the stars of Annie’s show are women in their work. She “produces their talent” so that women in front of an audience – any audience – anywhere – know the trade secrets of blowing your own trumpet with flair. 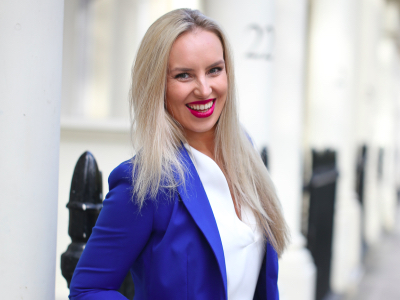