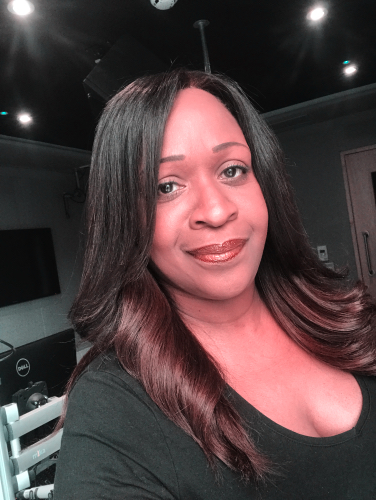 Angie Greaves is a radio presenter on Magic FM.

I currently broadcast on Magic Radio each weekday afternoon between 2pm and 5pm, and also present the Magic Soul Breakfast Show each weekday morning 7am to 10am. It’s great that I get the best of both worlds, playing Soul and Motown in the morning on Magic Soul (which is a digital station), and then a mixture of music on the main Magic Station which includes artists from Elton John to Luther Vandross, from Madonna to Tina Turner, from Fleetwood Mac to Kool and The Gang. I’m blessed.

I’d be lying if I said yes! I recently put a post up on Instagram stating that “Radio was never in my plan, but it was definitely God’s plan”. I never saw myself as having the “gift” of communication, my mother always used to tell me to keep quiet! I was temping back in the late 80s and was aiming to train as a teacher, so decided to take all the temping work I could get, and my first temp job was at Capital Radio. And that’s where the journey began

We will all be faced with challenges every day of our lives in every area of our lives. And, yes, I have had many challenges but learned years ago that if I put too much focus on the challenge and not aim to overcome it, I’d slow down, I’d get trapped. The challenge, and/or challenger becomes your focus and your goals and passions slip down your order or priority until your goals and passions disappear. The best thing to do is look at it head on, decide how you’re gonna overcome the challenge, and move on. You’ll find that until you do that the same challenge will present itself again and again and again. It’s draining. Draining of your time, space and emotions isn’t good. It isn’t positive.

There are so many things that are changing at the moment, and there’s definitely more than one thing that I would change. I would definitely “advise” women to keep going in their chosen roles, stay firm, stay strong and always “compliment” what your male counterparts are doing and have done. Bring your feminine energy to the table to create balance to display that business of all sectors can’t flourish if one sided – you need the male and female contributions and energy, so offer it up whole heartedly. Sometimes it means choosing your words, sometimes it requires stating your opinion. As women we have that natural tool. Use your tool wisely.

What advice would you give a young woman or girl looking to get into the media industry?

It’s such a great time to be in the media, there’s so much more to explore alongside radio, television, print and theatre which were the big four until the influx of social media. So I would advise young women and girls (as I do) make a decision as to which area of the media you want to get into. What’s your passion? What’s the best platform for that passion to be displayed? If it’s TV will your passion best be served in a production capacity? If you are someone who wants to be in front of the camera create a showreel and send it to production companies with your idea. If your passion is creative in terms of singing, acting or dancing would your passion be best served in the theatre, if so enrol on a Musical Theatre course. Social Media has created a more proactive demographic who are in charge of their brands, so you could create a YouTube Channel which is enveloped with your own DNA, however, whatever area you choose, get ready for the hard work, there’s a lot of competition in the market.

How can we encourage more diversity across the media sector?

Just look around you and see how society has changed. We are no longer living in a world where one colour of culture dominates all. Media, all forms of media, should reflect society.

I love Mentoring potential media students. It’s so satisfying to start meetings with shy and sometimes very quiet girls who blossom by meeting 6 (I offer a block of 6 meetings over a 4 to 6 month period). A lot of the time the reason for the blocks are personal, perhaps you’ve held on to limiting language which in turn has slowed down your progress in the work place because you don’t believe in yourself. To talk these things through, confidentially of course, and see the results at the end of the mentoring time is such a joy, so good to see. I would definitely recommend some mentoring sessions, it’s time well spent. I have a mentor/coach who guides me through my goals and why I sometimes don’t achieve them. The breakthroughs are amazing.

I always say my biggest achievement was working on Choice FM which was London’s first black radio station, broadcasting in a very Caribbean/Bajan style at times which was fun, and then slowly transferring to Magic Radio and still holding on to my audience, still having fun with my audience and achieving healthy listening figures

There’s definitely a book inside me, I’ve been blessed with a career on radio that has spanned 25 years and that needs to be documented. Having mentored young girls and ladies without anyone before me to follow it’s important that I give the next generation an insight as to how I did it which I sometimes don’t understand myself. I’ve raised 2 girls in the process and have somehow kept my sanity!! So I think the book needs to happen. And as much as I love communicating through the microphone I am feeling more and more that there’s a need to connect direct to people, so I see seminars, podcasts, communications and maybe a little public speaking, and then who knows, there’s a big wide world waiting to be discovered.

Just for fun – what is your favourite song?

OK, is it Marvin “Got To Give It Up”, or is it Aretha “Natural Woman”, Could it be Anita Baker “You Bring Me Joy”, Elton John “I Guess That’s Why They Call It The Blues”, or Luther “The Night I Fell In Love”…………….. that is one real difficult question to answer!!!