0
You have 0 items in your cart
Go To Shopping
Home > Rising Star Awards > What Happened Next - Rising Stars > Rising Stars: What happened next for Shivi Rajput 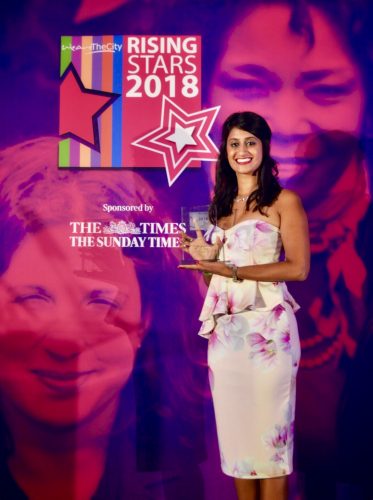 We spoke with Shivi Rajput, who won a 2018 Rising Star Award in Law (The Lynne Freeman Award).

Shivi is 29 years old and a Family Law Solicitor (5 years Post Qualification Experience). SHE graduated with First Class Honours in her Law degree and a Distinction in her Legal Practice Course, before being trained by a Deputy District Judge at a Legal 500 firm. She has personally dealt with hundreds of family law cases during the past seven years, ranging from straight-forward divorces to complex children and financial matters with an international element, and Shivi has had the privilege of helping many people in difficult situations. She is currently working for Eric Robinson Solicitors in the new Richmond upon Thames office, which is the firm’s 10th branch and their first venture into London.

Shivi joined the firm when the Richmond office opened, so she has been responsible for creating a caseload organically. Shivi has been actively involved in the business development for the office, attending regular networking events and giving presentations in the community on legal issues, including a presentation on Female Genital Mutilation to a group of 50 women and a presentation to law students at The Law Society on my life as a family lawyer.

Her goal is to become one of the youngest Deputy District Judges in England and Wales, whilst also continuing her private practice as a family law solicitor.

Whilst Shivi was studying for her degree, she also set up her own business called “Milkshake Magic” as a way of funding herself through university. Shivi offered party planning services, focusing on magic, contemporary party games and balloon modelling. She ran the business and also performed at all the events. Shivi was booked to perform at Johnny Depp’s son’s fifth birthday party, as well as charity events, large corporate events, local Borough events, schools and private parties. Although she has now stopped running the business, it vastly improved her leadership, organisation, business development and communication skills, which she have successfully transferred over to her current role as a solicitor.

Outside of work, Shivi is a former World Karate Champion, having represented England in several national and international competitions. She won the WKC World Championships in Germany in 2006 and she is a Second Dan black belt.

I was amazed but thrilled to hear that I’d won a Rising Star Award, especially when there was so much strong competition. I felt extremely honoured, and it gave me even more determination and drive to further enhance my career.

Both me and my firm promoted the accolade on social media and in the local press. It was also a prominent feature in the firm’s internal magazine.
Since winning the Award, I have been invited by the Society of Asian Lawyers to join them and represent BAME Women at the Law Society’s Women in Leadership in Law roundtable discussion. I hope that being actively involved in such important work will lead to greater equality and inclusion for minority groups, who are still significantly underrepresented at senior level within the legal profession. I have also signed up to two mentoring programmes and given my time to mentor aspiring lawyers, talking to them about how to overcome challenges and giving them practical insight into the life of a lawyer.
Working in partnership with a company called “Only Mums and Only Dads”, I wrote an article for a book titled, “101 Questions Answered about Separating with Children”, which will be published by Bath Publishing in January 2019.
I am also in the process of writing articles for the popular website, lawcareers.net, offering practical guidance and tips to law students about succeeding in this profession.

I would definitely encourage others to go through the WATC awards process. You get to meet so many inspiring women and hearing about their journeys was a great motivator for me; it make you even hungrier for success in your own field. The WATC team really champion female talent and all the women who made the shortlist are so encouraging and supportive; it’s a very empowering process to be a part of. If you are nominated, I would encourage you to blow your own trumpet. Women are generally shy about promoting themselves and their achievements, but if you’re doing great things in your work and making a difference, this should be celebrated, and your story could encourage someone else’s journey. Aspire to Inspire!

I believe networking is crucial to enhancing your career and it offers so many benefits. You get to raise awareness of your brand/services, which in turn can generate referrals and business. People do business with people they like! Networking with likeminded professionals also gives you the opportunity to tap into their experiences and learn from them, which can be invaluable.
0Shares
Rising StarRising Star AwardsShivi RajputWhat happened next

Alison is the Digital Content Editor for WeAreTheCity. She has a BA Honours degree in Journalism and History from the University of Portsmouth. She has previously worked in the marketing sector and in a copywriting role. Alison’s other passions and hobbies include writing, blogging and travelling.
Previous PostWhy women prefer women-only networking groupsNext PostSeven ways to get a better work-life balance | Infographic