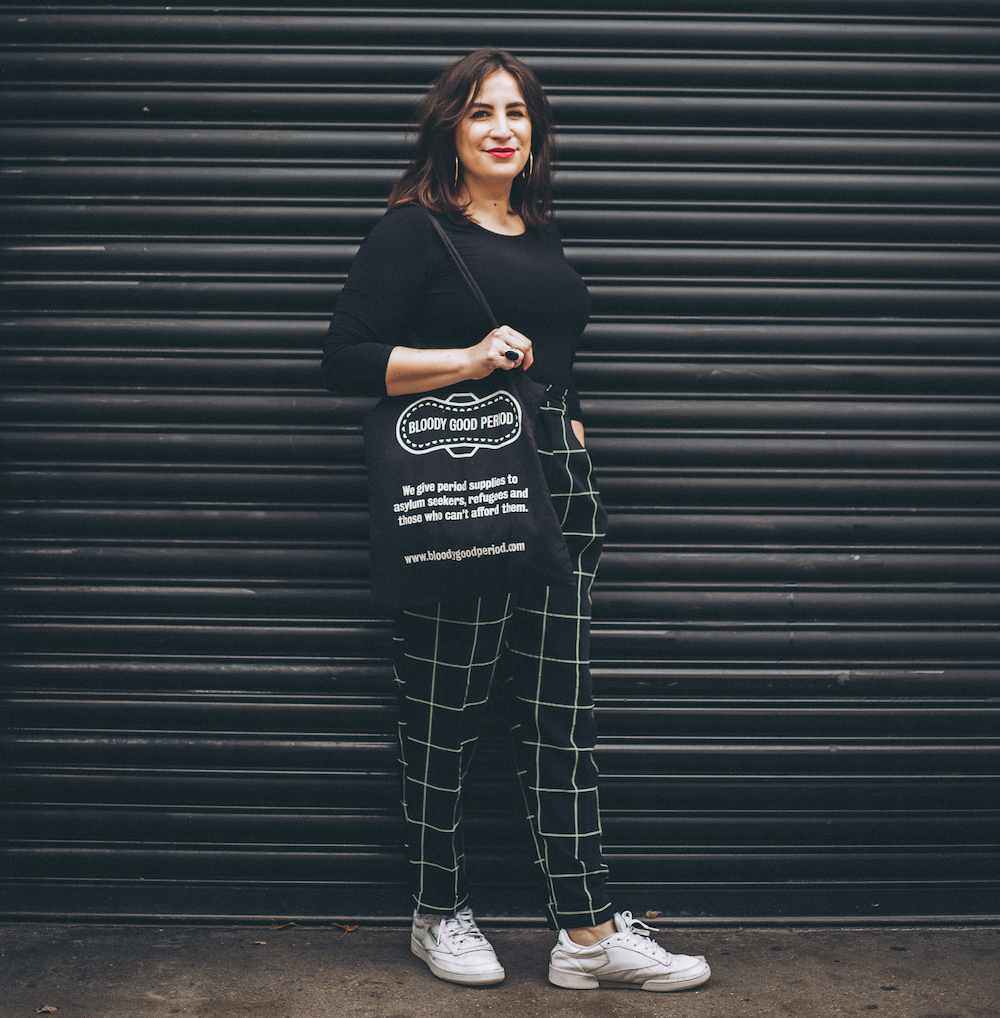 Gabby Edlin is an activist campaigning for menstrual equity, and the CEO and Founder of Bloody Good Period.

She started Bloody Good Period in 2016 when she was volunteering at the New London Synagogue asylum-seekers’ drop-in centre, and discovered that period products were only provided ‘in emergencies’. A whip around for donations of pad and tampons on Facebook turned into a full-blown operation to collect and distribute toiletries and period supplies for asylum seekers all around the UK.

Bloody Good Period has distributed 170,000 packs of period products since the start of UK lockdown in March 2020. Products have gone to refugees and asylum-seekers, food banks, community response groups, shelters for the homeless, those fleeing domestic violence, and in the early days of the pandemic, NHS frontline workers.

With the pandemic continuing to push people into financial hardship and poverty, more and more people are forced to make impossible choices between these essentials and other items. The level of demand is six times higher than pre-pandemic. Gabby has a Masters in Applied Imagination from Central St Martins (Distinction) specialising in feminism and comedy. She is originally from Manchester, and is now based in London.

Edlin knows how to get people talking about a previously taboo subject.

In the past five years she has made the previously overlooked issue of period supplies for asylum seekers a national priority and now she’s bringing her style of open and honest discussion to boardrooms across the country.

“At Bloody Good Period we want everyone who menstruates to live a happy and healthy life. This means getting free period products to everyone who needs them but we also run education programmes because there’s so much shame around periods and not being able to access the products that your body needs.

“In addition to this, we’ve just launched our Bloody Good Employers programmes, which help businesses around the UK to support people in their workforce who menstruate. We run workshops for senior leaders and entire teams around what a period really is and how they can support people who have them, particularly people who have really bad periods. The response we’ve had to the launch of Bloody Good Employers has been incredible. We’ve got really big companies – companies that you’d think wouldn’t be interested – who are ready and raring to go with senior leadership on board.”

While you might think that this wouldn’t be a topic businesses would want to go near, what Edlin has found in her work is that most of the time people aren’t afraid of talking about periods, they just don’t even think about them.

“The idea for Bloody Good Period came when I was working as a Nanny and the dad of the child asked me if I’d help set up an asylum seeker drop-in centre. They sent out a list of emergency products they needed and there were no period products on it. I asked why and they said “we give them out in an emergency”. Of course, periods shouldn’t be considered an emergency but centres like this one are generally run on a shoestring by volunteers, so  they didn’t have the money or time to manage the need of a regular, sustainable supply of period products. I thought I could help with that.

“I put a status up on Facebook saying I was collecting pads for the asylum seeker drop in with an Amazon wishlist up and that was how it started – they just never stopped coming. When I looked into asylum centers around London and asked them if they did period products, the response was the same –  they said they didn’t have money or they just hadn’t thought about it and that’s where Bloody Good Period came from.”

The fact that something as everyday as period products had been so overlooked showed Edlin that there was a big discussion that simply wasn’t happening.

“It was never just about getting products, it was about understanding why this hadn’t been addressed before. Our societal structures mean we don’t think about women’s needs first, we don’t think about the people who menstruate who aren’t women and we don’t listen to the asylum seekers or people in poverty to really understand what they need.”

She believes this idea of listening to what people need and then supporting them to get that is as important in the workplace as it is outside it.

“People want to support their teams and look after them. The first way to do that is to sign up to be a Bloody Good Employer, but it’s really about listening to people, asking them what they need and then when they tell you don’t assume they’re faking it. [When it comes to periods] there’s an idea of this double lie; either you lie about not experiencing the pain because you don’t want to be fired for being weak or you’re believed to be lying when you tell the truth. We’re saying to employers, ‘get the knowledge you don’t have and then listen to employees’ experiences.’”

Starting a period charity wasn’t Edlin’s original plan. She did a Masters at Central St Martins focussing on design for social change, where a lot of her work focused on feminism, men and comedy. One project saw her bringing in a group of male filmmakers, who believed themselves to be strong feminists, to make a film about feminism. As the script developed the filmmakers realised how much they didn’t know and a huge piece of learning took place, Edlin describes it as “a bit of a trick really” but it seems like the perfect learning experience for someone who’s career is now about showing all of us our blindspots.

Bloody Good Period has been going for five years but became an official charity three years ago and while the charity has grown in that time – moving from just supplying period products to providing educational programmes – the aims and values of it haven’t changed.

“Get period products to those who need them the most and make them free. It should be like condoms, you should be able to get them free… Ultimately we believe that the government should be providing these products for free. It’s not an opt-in situation with periods and the fact that it’s to do with women makes it obvious why people in power don’t care. As a charity we’ve created a huge amount of cultural change but the only way we can do that is if we have financial support.

“Charities don’t run on air, we don’t get government funding for the work that we do and it isn’t easy to fundraise for this work because of how shameful society finds these topics. And that it’s not seen as the most pressing of issues. We’re pushing this conversation hard but if we go away because we don’t have any money the conversation will stop. For any cause you care about, it will need money to support it. Individuals can help us by sponsoring a period but also by keeping having these conversations.  It’s incredible to imagine what could be if people keep talking and keep questioning, if we keep putting this on the agenda.” 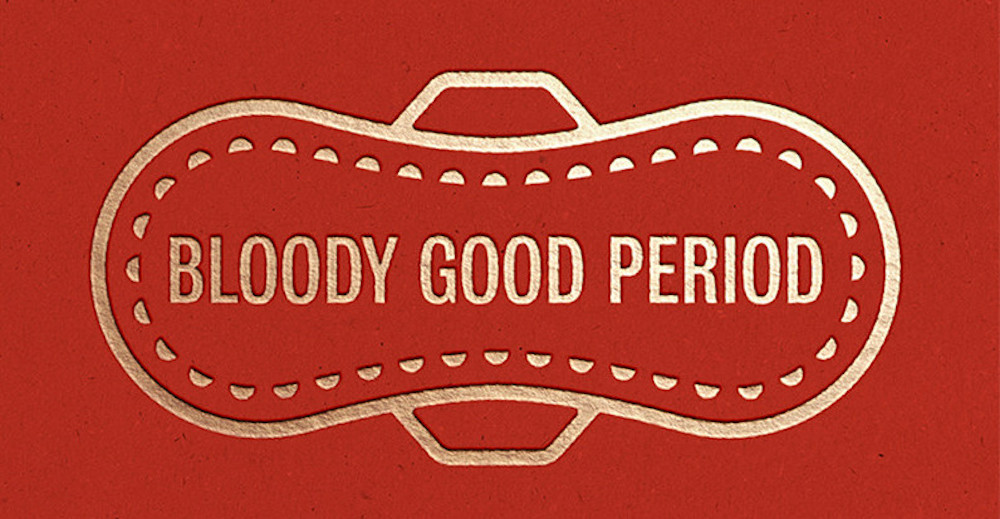 For Edlin, the creation and growth of Bloody Good Period has been a personal learning curve.

Her resilience and determination in the face of government indifference and social media trolling is impressive. She stopped using Twitter after facing abuse for including trans people in their work and then dealing with antisemitic abuse directed at her personally. She keeps an eye on the Bloody Good Period instagram account but is clear that for her managing social media means taking breaks from it when she needs to. Luckily she has an amazing team to who also take care of the Bloody Good Period social media so the work can be shared.

“Physically removing myself has been an important thing but as an organisation we remember the trolling is not really about us, it’s about you and how you’re feeling today. I think people see it as a game and that it’s faceless.”

Despite the difficulties, there is much for her to be proud of. She’s been a key part of changing the conversation around periods and highlighting a problem that many of us had been blind to.

“Seeing the cultural change that we’ve produced is amazing. Taking a step back and looking at how companies, for example, talk about periods is really different. Even though many of them wouldn’t quote where they’ve got [policies and ideas] from, we can tell it’s us and we can tell it’s our work and that’s really affirming. Becoming a charity was a highlight, the charity commission didn’t like our name so finally getting it approved was a really big deal.”

She doesn’t talk much about the highlights for her personally but she mentions one and in it you can see why she does the work she does.

“There’s a new Manchester Jewish museum and in it they’ve put a “notable Mancunians” section. They’ve put Bloody Good Period paraphernalia and a bit about me, and honestly my friend’s mum sent me a photo and I was over the moon. It’s the kind of place I would have gone to growing up and might have seen and thought “oh this woman does this and maybe I can do that one day too”. Also, to have periods in a museum!”

Despite everything she’s achieved, she’s still not finished.

“In the long term I want to keep pushing the conversation, talking about periods. One of the last frontiers is the workplace and that’s why I’m really excited about Bloody Good Employers. We spend most of our time in the workplace and here’s something we just don’t talk about. It’s also really important to think about the people who still can’t afford period products. This is still happening – people are still using their baby’s old nappies, bits of towel, a neighbour’s table cloth. It’s not just a moment of anxiety but constant anxiety, of leaking, of being thought unhygienic, of being evicted from your house because you’ve bled on a sofa. This is ultimately why we do this work. People’s mental and physical health, and livelihoods, are being affected because we don’t have period equity in this country. Lives being put on hold because they can’t deal with their periods, those are the things that still need to be remembered.”

To find out more about Bloody Good Employers or to sponsor a period, click here