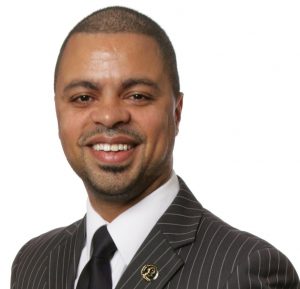 Rob was born in Paddington, London and grew up in the London Borough of Brent.

He joined the Ministry of Justice [then Lord Chancellors Department] in Oct 1983 – starting at Willesden County Court in North London.

Rob progressed to Deputy Court Manager before joining the South Eastern Circuit I.T. Team. In 1998 Rob landed his dream job with Corporate HR as a Development Trainer. Rob studied at the Civil Service College for two years, gaining a Certificate in Training Practice [CTP] and is now a member of CIPD.

In the summer of 2015 Rob was invited to lead the MoJ’s Diversity & Inclusion Team over the summer as temporary cover for four months. During this period Rob led the delivery of key priorities, including the Department’s response to the Civil Service Talent Action Plan and renegotiating contracts with all Diversity Staff Networks.

In April 2016 Rob was included in the ‘New View 50’ which recognises influential Black Asian Minority Ethnic (BAME) professionals in the public sector.

In May 2016 Rob was chosen to lead the MoJ’s Race Project – an inward facing programme of work aimed at supporting the MoJ’s published Diversity & Inclusion objectives and turning the dial on race equality.

Most recently, Rob was awarded an OBE in the 2018 New Year’s Honours list for ‘Services to Race Equality in the workplace and the community’ and received his gong from the Queen at Buckingham Palace in May of this year.

Rob lives with his wife and their two children in Harrow.

I was brought up by my mother who was a single parent and one of my first role models.

Because men a disproportionally occupy positions of power where strategic decisions are made. So, if men don’t support gender quality, talented women will miss out, organisations will miss out AND the UK economy will suffer.

I know that men are welcome and I have experienced a significant improvement in those invitations for men to get involved directly.

Yep, any explicit reference to women or female in the title CAN give some men an excuse to stay away.

Remind that for inequality to continue all that is needed is for good men to do nothing and that the only thing worse than the wrong action is no action.

I have noticed that some women are more inclined to focus on they own perceived gaps in skill or competence, whereas most of the men I mentor lead any self assessment with a firm focus on their strengths.