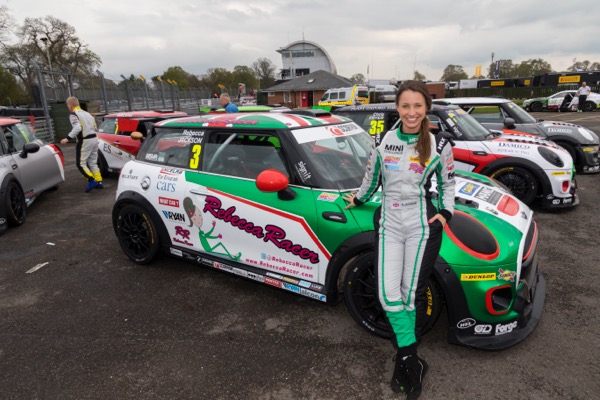 Entrepreneur, racing driver, motoring journalist and TV presenter Rebecca Jackson talks to us about what it takes to succeed in a man’s world and gives tips on how best to handle yourself when working in a male dominated environment.

Being brought up around cars and motorsport it’s no great surprise that I’ve ended up working in the motor industry. Whether it’s running my prestige car sales business, writing about cars in my regular motoring column or appearing on TV shows such as Fifth Gear or ITV4’s I Want That Car, I was always destined to work with cars. Over the years, I’ve competed in various race championships including the BRSCC Porsche 924 Championship, the SRO European GT Series and the Cartek Roadsports Endurance Series backed by Turtle Wax. In 2013, I engineered a 4-year plan to compete at the prestigious Le Mans 24hrs endurance race, respected as one of the toughest races in the world. In 2016, that dream was realised through hard-work, determination and an unwillingness to ever give-up.

In most areas of my career I’m in the minority as a woman but this has never hindered my success. I’ve always enjoyed the atmosphere and relished the challenges it brings! However, it’s not always easy for women working in an environment that can be at times boisterous and/or intimidating. There are certain ways to overcome these challenges and methods to use in order to make it easier to fit into a male dominated environment. Here are my top tips for women considering, or currently working in, a male dominated environment:

Be yourself and if you want to wear make-up or get your nails done then do it! Don’t feel that just because you’re surrounded by men you should avoid being feminine. That would be counterproductive. If you’re comfortable with who you are then those around you will accept you for you.

Give as good as you get

The old adage that men don’t ever really grow up may or may not be true. But in a male dominated environment there is often an atmosphere of bravado, bullishness and mickey-taking. One of the most fundamental things I’ve learnt over the years is that it’s okay to join in with the banter and try to take playful mocking on the chin. Usually it’s a case of, if you’re liked then you’ll be included in the playful jousting. It’s worth noting though that there is a clear difference between bullying or sexual harassment and harmless banter. I cannot comment on the former as it is not something I have experience of nor do I condone it! I do however relish a bit of mickey-taking!

Respect where respect is due

Generally, men respect other men for their experience, talent and competency and therefore credibility. Respect is earned when this has been established. As a woman, the same rules apply. Just because you’re a female, don’t expect to be able to command instant respect from your male colleagues; it should be earned. But, once you’ve proven yourself, you too will be accepted and respected for your worth. My trophy cabinet speaks for itself and if I ever come up against a sexist attitude, I’m aware that moaning about it isn’t going to achieve anything or change anyone’s opinion. I’d much rather rise above it and carry on achieving my goals and looking at my trophies than waste energy on outdated sexism.

We’re all humans underneath

I think it’s fair to say that a lot of men don’t freely express their insecurities, weaknesses or feelings and certainly not as much as some women do. However, don’t be fooled into thinking that men don’t also feel vulnerable at times. Make sure you remain mindful of how you treat people regardless of their gender. Just because someone isn’t sharing their concerns or worries about a certain situation doesn’t mean they’re not feeling it underneath.

Emotion has its place

It’s often said that women are too emotional for the big jobs but in actual fact a woman’s natural ability to empathise can make her an effective leader. While it’s true that too much emotion has no place in business, I’d advise anyone – male or female – wanting to lead people to maintain a sense of empathy and emotion. There is no need for women to over compensate or act like an “ice queen” in order to climb the career ladder.

Despite any worries or concerns women might have about working in a male dominated environment, working with our male counterparts is usually a rewarding experience. Embrace the strengths that each sex brings to the table and don’t be afraid of the differences. After all, we’re all here to do the best job we can do. By working together, we can achieve greatness and create a satisfying and effective working environment.