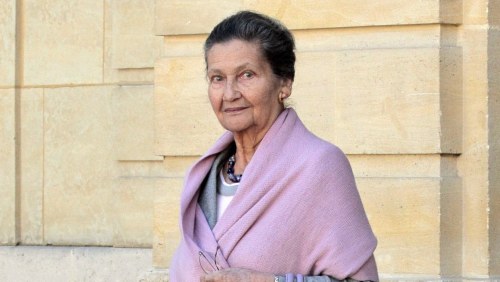 Veil was a French lawyer and politician who served as Minister of Health under Valéry Giscard d’Estaing, President of the European Parliament. She was best known for her instrumental role in legalising abortion in the 1970s.

Veil was born Simone Jacob in Nice, France. In 1944, aged 17, she was arrested by German authorities and together with her mother and sister, was deported to Auschwitz-Birkenau. They were later transferred to Bergen-Belsen, where her mother died of typhus shortly before the camp was liberated in 1945. Veil’s father and brother also died in the Holocaust.

Following her liberation, Veil went on to study law and political science at Sciences Po and at the University of Paris, where she met her future husband, Antoine Veil. The couple married in 1946 and had three sons together.

After graduating from university, Veil worked for several years as a civil servant in the Ministry of Justice, during which she successfully achieved the right to dual parental control of family legal matters and adoptive rights for women.

From 1974 to 1979, Veil became Minister of Health and successfully pushed through legislation to make access to contraceptives easier and to legalise abortion.

Across the globe, people have been offering their condolences. French President Emmanuel Macron tweeted, “May her example inspire our fellow citizens, as the best of what France can achieve.”