0
You have 0 items in your cart
Go To Shopping
Home > Career Development > Professional development > If you want to reach your full potential, don’t believe these common career myths 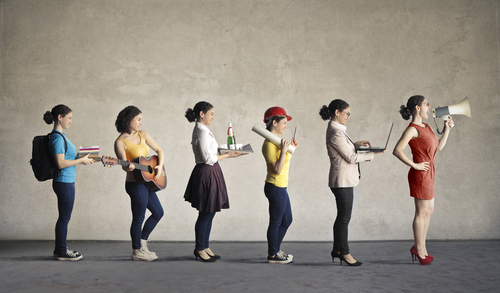 What does a successful career look like? For many people, it follows a similar path to this: you spend years in compulsory education, you go on to university and then graduation, you secure a role in a corporate firm and you slowly work your way up to management, working in that position until you retire.

For some that may be ideal, and for a limited amount of people that may be accurate, but unfortunately this career path is just simply not realistic or attainable for most – you often have to take steps back to go forwards. This career path could be described as traditional, and something achievable 20-30 years ago, but in that space of time our society and labour market have changed tremendously, so why haven’t our expectations of a career trajectory, and what we deem as a successful career, not changed too?

It’s true that people now work for longer and we have dual-income families, but there are also single-parent families and huge diversity. Not only this, but there’s a much vaster number of entrepreneurs, and budding entrepreneurs, career switchers, re-skillers and freelancers – our idea of a successful career in both work and life needs to reflect this better, so that people don’t miss out on opportunities to progress because they are so linear in their career focus.

Take Arianna Huffington for example, arguably one of the most famous business women in the world. After graduating from Cambridge University she moved to the US, became a bestselling biography writer, married politician Michael Huffington and eventually got involved in politics herself. She ran for governor of California, eventually losing to Arnold Schwarzenegger, suffering a very public defeat.

Though she lost, she learned from her campaign the power of the internet, and went on to launch the Huffington Post at the age of 55, disrupting the online news sector with its curator style and opinionated third-party pieces. While most newspapers were struggling with declining readership and adapting themselves to a digital world, the Huffington Post flourished and was ultimately sold to AOL for $315 million.

Arianna created the Huffington Post at the age of 55, defying all expectations that a successful tech entrepreneur must be young and male, simultaneously showing that it’s never too late to reinvent yourself and learn from previous backwards steps and failures.

And Arianna Huffington’s story isn’t a completely unique one. There are plenty of other people who’ve gone on to be incredibly successful in their careers who haven’t followed a traditional career trajectory. The main reason is they have not believed many of the common myths people use to subconsciously hold themselves back, whether it is “the only way is up” (you can move backwards or sidewards to move forward later), “you create your own success” (sometimes working with others and being collaborative helps to be successful, and so does luck too) and “leaders are born, not made” (no one is a born leader, and everyone has to learn on the job in management roles).

Another common cliché is to follow your dream at all costs. But, for many people, those who do not have money or privilege to fall back on, the short-term earning of money and providing for themselves and their families, means they simply cannot just drop everything and follow their dream. Take current Pepsi Co. CEO Indra Nooyi as an example, Indra was certainly not born with a silver spoon in her mouth; she began her working life as a receptionist doing the graveyard shift from midnight to 5am in order to earn money to pay for her Masters degree at Yale, which would not have been possible without working this shift. Now Indra Nooyi is CEO of Pepsi Co., showing not everyone who becomes successful in life, has done so from a privileged headstart.

People have to overcome lots and lots of challenges and there is no cheat card giving you each step to success. However, there is one way to ensure you reach your full potential – do not define your career with stereotypical clichés and advice. You must stop holding yourself back with statements that are commonly heard but completely not true.

One, for instance, which I found held me back in my own career was the fact I did not come from a family who had all been on to pursue a college education – in fact I was the first in my family to go to university. I thought that people at the top of their fields were naturally gifted and that hard work would get me my degree and assure me of an income, but beyond that, I felt that it was all about the talent. After all, everyone is hard-working, no? So, it’s only talent that differentiates good from great. In retrospect, I could not have been more wrong.

I only learnt this when I went for a year abroad in the US for my PhD, where I met one of the leading academics in my field – I thought she was a superstar and that she was incredibly naturally gifted at her role. It was only after working with her for a while that I realised, of course, she was gifted, but she also put an incredible amount of hard-work into everything she did, whether it was career-focused or even life-focused like going to the gym. This made me understand that hardwork really prevails over natural gift.

It is true that  people often have the most amazing potential, but they do not go on to fulfil it because of clichés or thoughts they believe that are not true – and they become a barrier to people progressing. That is why in my book, Making Your Way: The (wobbly) Road to Success and Happiness in Life and Work, co-authored with Marion Debruyne, Dean of Vlerick Business School, we debunk much of these myths that hold people back in their careers, using personal anecdotes, research and stories of successful people to show you there’s not a one size fits all approach to being successful.

It’s important that these myths are debunked so that everyone can have that lightbulb moment which removes all barriers and obstacles that are restricting them from becoming successful and happy in life. Ultimately, we must learn to take risks, and rethink our career path to find success and fulfilment.

Katleen De Stobbeleir is a Professor in Leadership and Coaching at Vlerick Business School. Her specific areas of expertise include inclusive leadership, managing leadership (and career) transitions, leadership development, coaching, and building a feedback climate. Together with the dean of Vlerick Business School, Marion Debruyne, she authored the book “Making Your Way”, a book about the wobbly road to success and happiness in life and work.

0Shares
career mythsKatleen De Stobbeleirreaching your potential
Previous PostApply Now: Award-winning fellowship supporting leaders with babies to progress their careersNext PostThe rise of narcissistic abuse in lockdown – the common traits and how to avoid it
X