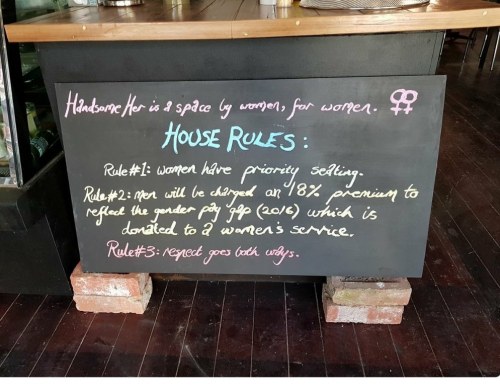 A vegan café in Australia is charging men a 18 per cent tax, in a hope of bringing awareness to the gender pay gap.

The café, Handsome Her in Melbourne, is also giving women priority seating.

A sign has been displayed in the café, stating the house rules including, “women have priority seating”; “men will be charged an 18 per cent premium to reflect the gender pay gap which is donated to a woman’s service”; and “respect goes both ways.”

According to recent statistics, in Australia the average female worker earns 17.7 per cent less than the average male worker. In the UK, the gender pay gap is currently around 18 per cent.

The extra money raised from the tax will be donated to the Elizabeth Morgan House charity, which helps Aboriginal women and children.

Speaking to Broadsheet, café owner, Alex O’Brien said, “I do want people to think about it, because we’ve had this [pay discrepancy] for decades and decades and we’re bringing it to the forefront of people’s minds”

“I like that it is making men stop and question their privilege a little bit.”

However, the ‘man tax’ has divided people, with a number taking to social media to express their outrage.

One Twitter user said, “I think if you want to fight for equality then surely treating everyone the same is the way to go.”

Another said, “If you’re setting up a venue that charges me extra for the crime of being born a man you’re part of the problem IMHO.”

Some Twitter users were also calling for a boycott of the café.

Despite this, O’Brien is unperturbed and argued that men who visited the café had been positive about the tax. So far, it is thought that the premium has raised a couple hundred dollars for the charity.

Alison is the Digital Content Editor for WeAreTheCity. She has a BA Honours degree in Journalism and History from the University of Portsmouth. She has previously worked in the marketing sector and in a copywriting role. Alison’s other passions and hobbies include writing, blogging and travelling.
Previous PostAn early arrival, and a change of directionNext PostSinead O’Connor reveals mental health issues and criticises stigma around mental illness

Pre-lockdown, female workers were underpaid by £126 billion. What can they expect in the post-pandemic world of work?