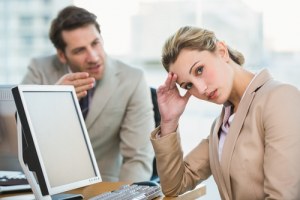 Have you ever worked with someone abusing their power or putting others down? You may have seen their dark side personality shine through? You might then recognise some of the behaviours outlined in this article.

But what are dark personalities?

Generally, three traits are summarised under this term, namely, narcissism, Machiavellianism, and psychopathy. Here is what they are in a bit more detail:

For a narcissist, everything is about them and if it isn’t, it should be. They have little regard for others, unless they are ready to feed their narcissistic ego. In contrast, Machiavellians do not need to be in the centre of attention as long as they are the ones pulling the strings in the background. They use others as instruments and manipulate them to achieve their goals. Psychopaths are cold-hearted, impulsive, and ready to show antisocial behaviour. Of course, these are the extremes of those traits but even in moderate dosages these dark personalities can be harmful to others in organisations.

What damage do they do in organisations?

The main issue with dark personalities is their lack of empathy for others. For example, narcissists are initially charming but over time this effect wears off when others realise that the narcissists are only interested in him/herself. They also tend to overrate their own performance and react aggressively when confronted with negative feedback. Machiavellians lie and cheat to advance and can use their power to be abusive to their followers. Psychopaths have no moral compass and are prone to unethical decision making. They might bully others and treat them unfairly.

Since dark personalities are not interested in their organisations’ goal, unless it happens to tie in with their own goal, they can derail organisational performance if they are in powerful positions. But even as followers, their behaviour can negatively affect others who they work with, either through lack of care, manipulation, or callousness.

What can organisations do to avoid the issues dark personalities create?

Furthermore, make a thorough analysis of “success” of a person and query their self-evaluation. Self- and other evaluation might differ hugely, giving an indication that something is amiss. Also, take 360-degree feedback seriously. Dark personalities might behave differently to people depending on their use to them. Differences in how someone is evaluated from different levels could point to a problem.

Finally, keep leaders in check. Ambiguous situations, lack of thorough evaluations and not holding people accountable for wrongdoings can contribute to the leeway dark personalities have and take advantage of.