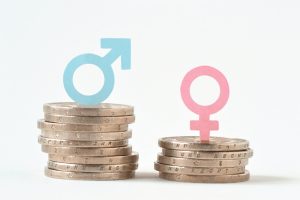 The financial services has the worst gender pay gap of any UK industry — that much is clear, despite the fact only around one in 10 financial organisations has even submitted the relevant data to the government.

The pay gap is also the biggest worry in finance. Almost a quarter cited it as the biggest issue in their place of work, and nearly half (45%) don’t think enough is being done to close it. Some of the worst offenders, such as Barclays International, have a mean gender pay gap of 48% and a bonuses pay gap of a stunning 79%.

But in order to close the gender pay gap it is important to understand how it came about in the first place.

Women are still thought of as the ‘newcomers’

It is difficult to comprehend just how quickly the world has changed in the space of a single lifetime. My own grandmother had to get signed permission off of her husband (my grandfather) in order to open a bank account. Since practically the dawn of time, the expectation is that it is the male who should be out ‘breadwinning’ — a practice that took a tumble with the First World War and dismantled after the end of the Second.

But the notions of pre-war men live on in their old fashioned descendents — their children and grandchildren, who have sculpted and influenced the younger generations that are replacing them. This has helped to create an “alpha male” culture and an “old boys club” which, heightened at senior levels, leaves no room for women or acts as an active woman-repellent.

The competitive nature among the top roles places huge stakes on presenteeism — the act of staying in the office long after normal working hours draw to a close. It is no surprise that this culture takes no prisoners when it clashes with pregnant or new mothers, who are judged on their lack of presence; rather than their actual work effort.

Women are the victims of unconscious bias

The world changes so quickly that it sometimes outpaces ideas. Like the viewpoints of the pre-war generations have been slow to disappear, the financial institutions have been particularly slow to wake up to the modern world. Perhaps this is because the financial world was especially slow at encouraging women from participating.

This means that negative stereotypes, assumptions and biases are still commonplace in finance. Particularly in senior and leadership roles. Rather than overt sexism, there is just the complacency that management is “a man’s job” and that women are not strong enough to persist in a “masculine corporate culture”.

This means that the structure in many financial institutions is actively working against women. For example, the McKinsey report Women Matter: Gender diversity, a corporate performance driver cited one KPI as “unfailing availability and total geographic mobility” — an inherently pro-male, pro-childless bias that immediately disadvantages women. There is also the “paradox of meritocracy”, in which those already reaping the rewards use their lofty positions to reign in even more.

And women are still harassed in the workplace. A lot.

Up to about 78% of women believe sexual harassment is at least a problem in the financial industry. Harassment can vary from unwanted comments to downright touching, or misread sexual advances — all of which are inappropriate. One woman I spoke to was even ridiculed for being pregnant. One survey, by InvestmentNews, revealed that almost half (40%) of women have left their place of work after a particularly egregious harassment episode.

This harassment — totally unacceptable — might have two simple explanations. One is that financial institutions are still overwhelmingly male and late middle-aged. This almost totally one-sided gender paradigm heightens sexual attitudes in men towards the few women that they encounter daily. The other is that the near total absence of women has, traditionally, isolated financial institutions from progressive, pro-woman ideals. Thus, the old pre-War ideas have languished, undisturbed and unchecked; where they express themselves whenever they collide with a female colleague.

Tackling the gender-pay gap: What we can and cannot do

The major problem, in my opinion, is the hangover of old, pre-First World War conventions — conventions that have reigned for hundreds of years, if not thousands. The world has changed remarkably over the past century; and even in the stretch of a single lifetime. But as everything quickly changes around us, ideas can be slow to respond. Old habits die hard, after all.

Apart of my remedy for tackling the gender pay gap is time. But I know that won’t do as an actual strategy. In the meantime, here’s what we can do to speed up the process:

And finally, a bit of soft power. Although I’m not in favour of fining or sanctioning businesses — I think that’s an unhealthy way to go about it — a bit of soft power never hurt anyone. Sunlight is the best disinfectant, and persuasiveness can be more effective than even the threat of the priciest fine.

There is still a long way to go, but when finally gender parity does arrive, I have a feeling the old zeitgeist will feel as strange and as ancient as colonialism does today.

This article was written by Jessie Dean of Oakmount Partners Ltd, an investment consultancy firm based in Essex, UK.