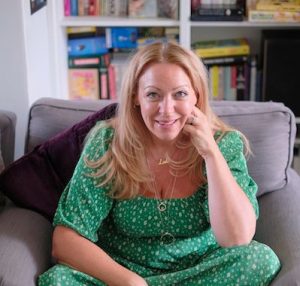 Lulu Wood is the author of new women’s novel Milkshakes for the Almost Dead, which has been trending on Amazon’s Hot New Releases. This is her fifth novel.

Her stories and essays have appeared in You Magazine, The Telegraph, Company, Glamour and Cosmopolitan, among others.

Lulu Wood is also a cultural commentator, a focused feminist, and a brilliant wife and mother.

I was born and raised in the most entrepreneurial of counties, the mighty Essex. One of three sisters–and  a typical middle-child–I’ve been trying to get noticed ever since. I was convent educated before heading off to UEA and Illinois to read American Studies and was incredibly lucky to get my first job in London at Polygram International, back when there were jobs. Polygam was bought by Universal and while working in the marketing department, there I wrote my first book, “Toasting Eros.” I found an agent (the incomparable Ali Gunn at Curtis Brown) and got the first of two, two-book deals with Harper Collins to write commercial women’s fiction. I left Universal after five years to focus on my writing and switched to three-day-a-week consultancy for an entertainment creative agency, LipSync, that specialised in trailers and TV campaigns. I was at LipSync for 14 years, eventually running the agency, until I had my daughter. Now I am a full-time marketing consultant and writer, and my fifth book, “Milkshakes For The Almost Dead,” has just been released in the UK. So it’s been pretty busy.

No. I wish that I had, but I was a working-class girl from Essex with no real idea what I was doing! I didn’t know what I wanted to be or even what I could be really; there was no google, or websites to check. I just knew that I wanted to be in ‘the media’, whatever that might be. When I got my book deal and moved to LipSync it felt like the right decision. But even then, I had no real idea what I was doing, and truthfully it felt a bit more like servicing contractual short-term obligations (write another book, write another trailer script) than thinking about the bigger picture. But I was young, living in London, and having fun, and that felt like enough. I wish I’d been more strategic, but I still had a very nice time.

All the biggest challenges have been since I became a mother. It was then that I realised how much of my time I had previously given to my job, and how much easier it is to be good at something when it is your sole focus. I found it very hard to deliver the same standard of work to my clients and not be available 24-7. Some people manage to make that shift work easily, but I could not.

Other than staying married while raising a toddler? Writing “Milkshakes For The Almost Dead,” my new book. When I was 25 and wrote “Toasting Eros,” there was no pressure–financial or emotional. This time around, it’s taken a lot longer and it’s been so much more challenging, not least because I need to help pay the mortgage at the same time. But also, because I care so much more now about what I’m writing than I think I did in my twenties. I really wanted Milkshakes to be good! It felt like my reputation was at stake. But it’s incredibly rewarding to see it out there now, especially as nice reviews start to come in, knowing I did this one almost completely on my own. Unfortunately, writing full-time is a huge privilege that few can afford without a hefty advance, and that isn’t the reality for most writers these days.

I have always believed in myself, and thank goodness for that because lots of people won’t. My friend Claire once said to me: you never think you’ll fail, and that is true. I don’t really see that as a potential outcome. Naively I think if I just keep working and keep trying, I’ll get there, and most of the time it works. But there were and still are lots of easy ways for people to dismiss me: I’m from Essex of course, I’ve worked in advertising (the showy shallow cousin of publishing) for a long time, so what business do I have thinking I’m a writer? I’m a woman in her forties, which is when you really start to notice that you have become invisible! I had no idea how much luck played a part in getting my first deal at 25. Just BEING 25 can give you a huge advantage in publishing. But it’s nice to notice that luck now, at least. At the time I just thought I was crazy talented, but there was some other stuff going on as well.

Oh, I’d have loved a mentor, I just didn’t have one. I was always trying to find one, and still am! I have tried to be that person myself, particularly for women who have worked for me over the years, although you’d have to ask them whether they found it helpful or Alan-Partridge embarrassing. I hope it was the former, but you never really know, because nobody is completely honest with their boss of course.

Honesty with ourselves about the way we behave towards other women should be mandatory. We have to stop judging each other. We have to be true allies. We can shout and scream about male behaviour all day long, but we have to clean our own shop, too.

Writing the second book in the Girls and Monsters Trilogy, “The Devil’s Sons,” and making it a success. I’d love to write for television as well, which would merge both of my worlds.  I have some ideas that I’ve been playing with which could be really exciting, but all of this takes time of course. Achieving the right work-life balance for my family is crucial. Staying balanced and happy is key.