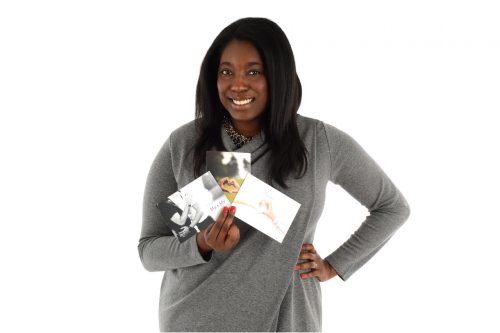 A few years ago while shopping for an anniversary card for her then fiancée and failing to find any that celebrated interracial love, Tineka found inspiration in her frustration to set up a greetings card product that genuinely reflected the diversity of modern relationships today.

Tineka developed Huetribe to produce greeting cards that recognise and celebrate diversity, as well as create a brand with a wider social purpose too.

Tineka believes that the greeting cards industry has a small but significant part to play in promoting social inclusion, acceptance and tolerance through products that celebrate love irrespective of race, sexual orientation, gender and ability.

I’m founder of Huetribe, a greetings card publisher which promotes social inclusivity and celebrates the beauty and diversity of modern day relationships by catering to multiracial communities as well as interracial and LGBTQ couples. The idea for the business came to me after years, as an ordinary consumer, trying to find occasion cards that reflected my relationships and friendships. I have a very diverse and multi-cultural social circle, but when it comes to birthdays, engagements, weddings and other notable occasions, I could never find a greetings card that was relevant to my life or my relationships. I perceived a vast market with huge purchasing powers being radically underserviced by an antiquated greetings card industry that only knew how to portray a very traditional and narrow view of modern life, modern love and modern relationships.

The last straw came when my husband bought a card with a couple of penguins on it to celebrate our anniversary, as it was the only card he could find with a black and white couple on it! Of course I could see the funny side of this, but the wider implications are more serious. Through underserving minorities (a term that is really a misnomer given that minorities account for a huge proportion of society), greetings card publishers are in a sense stating that any individual or relationship that doesn’t fit under the conventional white and heterosexual banner isn’t commercially or socially relevant. In turn, it becomes complicit in pushing out the same racial and gender stereotypes that prevent social acceptance from moving forward.

This matters because greeting cards are something that we all buy for loved ones to commemorate an occasion; but if we are purchasing – in a sense – ‘one size fits all’ cards that do not address the nuances of modern life and its relationships, we are also unconsciously reinforcing these stereotypes by consuming and disseminating designed values that surreptitiously perpetuate discrimination.

Products these days have become very much a tool for activism; a means of initiating some kind of positive social change. Of course, my cards are small scale, but it’s all part of a larger movement that enables all of us to question how we can improve lives via design and through commerce.

Not really. I wanted to be a ballet dancer, and this was a dream I harboured well into my late teens. My mother was fully supportive of me practising ballet recreationally, but when I informed her at 17 years old that I planned to audition for entry into a few ballet companies in New York, she immediately stopped paying my fees as a means of ensuring that I refocused on getting a degree. Education was non-negotiable, it was that simple. I come from a middle class family, but my parents grew up in working class households – they were able to flourish in society by means of education. So my parents wanted me to take advantage of the opportunities that they had worked hard to secure for my sister and I – opportunities that weren’t previously available to them when they were young. But my upbringing gave me grit, determination and a strong work ethic, which has led me to secure work internationally as a communications consultant, from working in a top PR firm in London to the United Nations, where I am based now.

I sincerely believe that if you are a woman from a BAME background climbing up the corporate ladder, you will at some point face discrimination in the workplace – however subtle. These are microaggressions. It’s just inevitable. I’ve experienced this in the majority of positions I’ve had. I know that I had to probably work a lot harder than anyone else to succeed, particularly in my initial career as a PR where there is an inherent lack of both social and racial diversity within firms, as well as a lack of gender diversity within the most senior director roles in public sector organisations. In one job at top London PR firm, I was told not to go up to the desk of certain directors and to email before I approached their desk within our open plan space, while other colleagues (who were white) were allowed to. I was also told by one associate director, who is now the managing director of the same team, to ‘know my place.’ On two occasions I was passed over for promotion and a pay rise in favour of a white male counterpart.  It’s hard to say whether the treatment was a result of unconscious bias at management level – all I can tell you is that the way in which I was treated, compared to my white and also male counterparts, was palpably different.

Anyone can benefit from the support and counsel of a mentor; someone who can essentially provide an unbiased ear and will help your career and personal development in a way no one else can is genuinely worth their weight in gold. But like any dynamic relationship, finding the right mentor is a truly personal one. You have to have the right synergy with your mentor in order to make the relationship truly productive.

I’ve had mentor support whilst at university as well as when I was working in London. I’m still in touch and I still receive valuable support me today. My mentors have had a enormously positive impact on my personal development; the support gave me the confidence to go for things that most people say I wouldn’t be able to achieve.

I would like to see clear progression in terms of sexual, gender and racial diversity occur across all corners of life and industry – from greeting cards in retail stores to entertainment and arts where there is a distinct shortage of actors and writers of colour achieving critical acclaim and recognition for their work, to more diversity on every level within fields typically dominated by white, university educated men, particularly within STEM industries. Ultimately, it would be great to see some sort of systemic change that facilitates those who are marginalised to pursue careers they never thought would be an option for them. I’m going to be positive and imagine more people from minority backgrounds superseding their challenges – whether that is because of disability or breaking out of difficult social circumstances – with great achievements that are bigger than them, lives beyond them, and which in turn encourages further positive social change.

When a woman is in leadership, whether she likes it or not, she has the responsibility to support her female employees and create a space where women feel comfortable at work. Women can definitely do much more to support each other to create a better work environment, culture and best practice that facilitates career progression but also social progression too. Patriarchal infrastructures of companies see women pit themselves against other women to the point where working women can resent working mothers for leaving the day early to do a school run, to working mothers feeling that they are being passed over for promotion because they are perceived as less ambitious. Obviously there are exceptions to the rule, but these are rare and these women succeed despite these challenges. I’m not a mother myself but I understand and empathise that this is a lose/lose situation. If women cannot be supportive of each other, then progression to achieve gender parity at board level and across many organisations – especially within traditionally male dominated roles – will be hampered. That said, in order for the work environment to improve for women, men must likewise champion, advocate and support women at every level where necessary – not because it’s an outreach programme but because, morally, it’s the correct thing to do and, on top of that, it just makes economic sense.

Getting Huetribe to become the first ever greetings card producer creating images of interracial couples, to get stocked by a high street retailer nationwide is, for me, a pretty key achievement. Our cards are now stocked across Scribbler stores, which is such a refreshing and modern brand and their company really believes in the importance of diverse representation on greetings cards being available – I hope other retailers follow in their footsteps. It’s great to see what has long been a dream and personal mission become a tangible, commercially viable reality, so I’m very proud of that. I think it’s a small but significant start in modernising the greetings card industry as well as contribute to a wider movement to promote social inclusivity and the beauty of diversity in human relationships.

There is still a long way to go in terms of ensuring the proliferation of diverse groups represented in greeting cards. Many stores are still hesitant to carry these cards because they think diverse cards are not commercially viable – which just isn’t true. Our goal is to continue to advocate from within the industry and expand the number of high street retailers we’re currently stocked in.

Previous PostAll the tales of humanity – Encouraging more women into the arts industryNext PostCould you help Future First to create an alumni programme in every state school?