Women are ignoring the symptoms of ovarian cancer and unknowingly putting themselves at risk.

According to research conducted by Target Ovarian Cancer, women in the UK are more likely to consider changing their diet than visiting their GP when confronted with bloating, a major symptom of ovarian cancer.

The research showed that when faced with persistent bloating, women may unknowingly put themselves at risk by opting to do things like eat probiotic yoghurts or cut out gluten, rather than visiting their doctor.

Of those surveyed, half of UK women said they would do something with their diet, whereas only 34 per cent said they would see a doctor if they were concerned about bloating.

“I thought that maybe I might have irritable bowel syndrome because there are similar symptoms.”

“I’d even tried going gluten free, but it made no difference.”

“The idea of cancer hadn’t even entered my head.”

“You just never dream this is going to happen to you.” 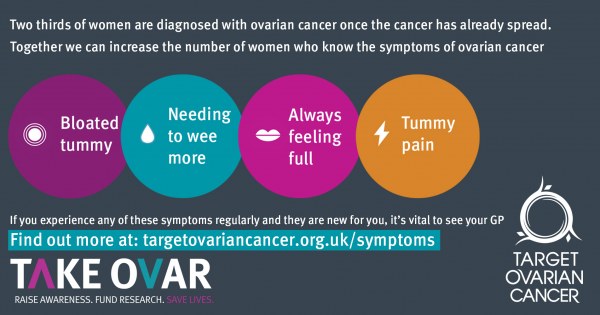 This awareness gap means that women are not visiting their GP promptly, not being sent for the correct ovarian cancer tests quickly, and risk missing out on a crucial early diagnosis.

More needs to be done to raise awareness of the symptoms of ovarian cancer. 11 women dies every day from this type of cancer and two thirds of women are diagnosed with ovarian cancer, once it has already spread, making it harder to treat.

Target Ovarian Cancer has previously found that just one in five women can name persistent bloating as a symptom – an alarmingly low rate of awareness.

Research also shows that women over 55 – who are most likely to develop ovarian cancer – are least likely to search their symptoms online. This is leaving them at risk of a delayed diagnosis.

Annwen Jones, Chief Executive of Target Ovarian Cancer said, “A probiotic yoghurt should not be preventing a woman from visiting the GP promptly if something is worrying her.”

“Women should not be risking their lives because of the enduring awareness gap around the symptoms of ovarian cancer.”

The TAKE OVAR campaign aims to raise awareness of the cancer, fund research and save lives.

Find out more about the TAKE OVAR campaign here.

Alison is the Digital Content Editor for WeAreTheCity. She has a BA Honours degree in Journalism and History from the University of Portsmouth. She has previously worked in the marketing sector and in a copywriting role. Alison’s other passions and hobbies include writing, blogging and travelling.
Previous PostFour key strategies to support your return to work after maternity leaveNext PostBusiness in the Community launches Race at Work survey for 2018