Glasgow City Football Club have launched their new kit with an inspiring message.

The away kit features the message: ‘You can’t be what you can’t see’, with the aim of inspiring the next generation and highlighting the lack of media coverage of women’s sports.

Accompanying the new kit, Glasgow City have also released a video highlighting the shocking statistics about women in sport.

These statistics show the huge disparity in coverage of women’s sport in the media. To coincide with this, the commercial investment in women’s sport only accounts for 0.4 per cent of the total sports sponsorship between 2011 and 2013.

Laura Montgomery and Carol Anne Stewart formed Glasgow City Football Club in 1998. Montgomery has since said the pair were ridiculed when they vowed to create the best team in Scotland and one of the best teams in Europe.

The club is now the most successful Scottish women’s team of all time. They currently play in the tip division of women’s football in Scotland and the higher two level of the Scottish Women’s Premier League.

Watch the full launch video below:

Alison is the Digital Content Editor for WeAreTheCity. She has a BA Honours degree in Journalism and History from the University of Portsmouth. She has previously worked in the marketing sector and in a copywriting role. Alison’s other passions and hobbies include writing, blogging and travelling.
Previous PostFemale NASA astronaut Peggy Whitson breaks spacewalking recordNext PostAll messed up yet somewhere to go 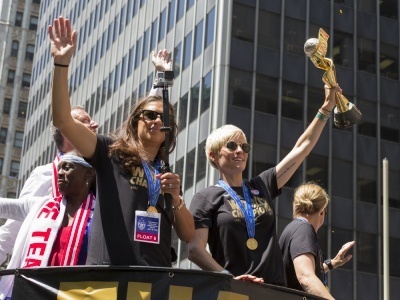