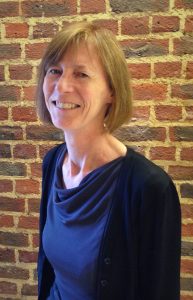 Gillian says she has the most fascinating job in the world leading an organisation that matchmakes and manages relationships between charities in need of strategic transformation and carefully selected teams of senior professionals and entrepreneurs with skills to offer.

Gillian joined Pilotlight as a project manager in October 2005, served as Deputy Chief Executive in 2007 and became its Chief Executive in 2013. She has helped thousands of business leaders burst out of their professional bubbles and combine their commercial experience and personal values.

Her work straddles a UK charity sector dealing with increasing deprivation and a business world that is being challenged to pair profit with purpose. She still experiences an element of delight each time these worlds connect, enabling business and charity leaders to learn from each other in the process.

Gillian has a gift for languages. Before entering the third sector she had a successful career as Director of Studies and subsequently as General Manager of a chain of language schools in Italy. With her passion for languages, she became involved in educational publishing, where collaborating on a new edition of a bilingual dictionary was a highlight.

Her long-term interest in the third sector was sparked by a three-year stint with Voluntary Service Overseas in Laos, during which she became VSO acting country director and advised the Laotian Ministry of Education. She holds a master’s degree in Development Management from The Open University.

Geographically I can describe my work in 3 phases: Italy, South East Asia, UK. I have always loved languages and travelling and after my degree in Spanish at Trinity College Dublin, where I grew up, I worked for many years in Milan in language teaching and training and educational publishing.

I suffered a crisis of ‘purpose’ and left my role as General Manager of a chain of language schools to volunteer with VSO in Laos PDR. I ended up working for the Ministry of Education there and was Acting Country Director for VSO. It was a tremendous learning opportunity, not least in understanding how little I knew, and I decided to come back to the UK to do an MSc in Development Management.

While researching my dissertation, I came across Pilotlight and was intrigued by the charity and business combination and attracted by the coaching/mentoring approach. Pilotlight was still in the early stages of developing its model and programmes so I had lots of opportunities to feed into that and grow with the organisation. I became CEO over 5 years ago and I’m still learning – from our amazing charity leaders, business members, and staff. Leading a mission driven organisation with a social purpose is incredibly fulfilling.

I didn’t, something that I regret to some extent, or at least am conscious of, given that I now run an organisation which has planning at its heart! But we are all the sum of our experiences and it’s impossible to know if things would have turned out if I had had a plan. I feel I was lucky with the opportunities that came my way.

As a woman, I would say a challenge has been to overcome the unconscious biases I grew up with around expectations, of ‘acceptable’ ambitions and behaviours. Even today, I can get frustrated when I interview women and feel they undersell themselves.

Leading Pilotlight to success in terms of results and stability that means we can concentrate on making an ever-increasing positive impact. And, building on the realization that we’re creating value not only for charities but also for our business members.

The mantra: it’s all about the people. A leader has many competing priorities and it can be difficult to remember that time spent talking to staff and other stakeholders is key.

I’m very committed to the value of good mentoring and at Pilotlight I’m surrounded by good mentors, both my own Board members and Pilotlighters generally, and I take full advantage of their insights and support. I have formally mentored two other charity leaders and within the Pilotlight leadership team my approach is very much a mentoring one. I can see that approach in turn in how they manage their teams. It’s fascinating how effective this can be for learning and development (on all sides).

More women in power. I’m not saying we’re better than men but let’s take the lead for a few generations and see how it goes!

Remember you can do anything. Keep checking that what you are doing is fulfilling and if not, look for other opportunities.

My next challenge in Pilotlight is to leverage power of the Pilotlight community – the almost 800 charities and 1,800 business members we’ve worked with to date. Working with all these inspiring and committed people has equipped us with a wealth of knowledge and experience we want to use for the benefit of both social, public and for profit sectors. A big ambition is to embed the value of collaboration – for us all to remember what the ultimate purpose of our work is and aim to achieve that in the best way we can.