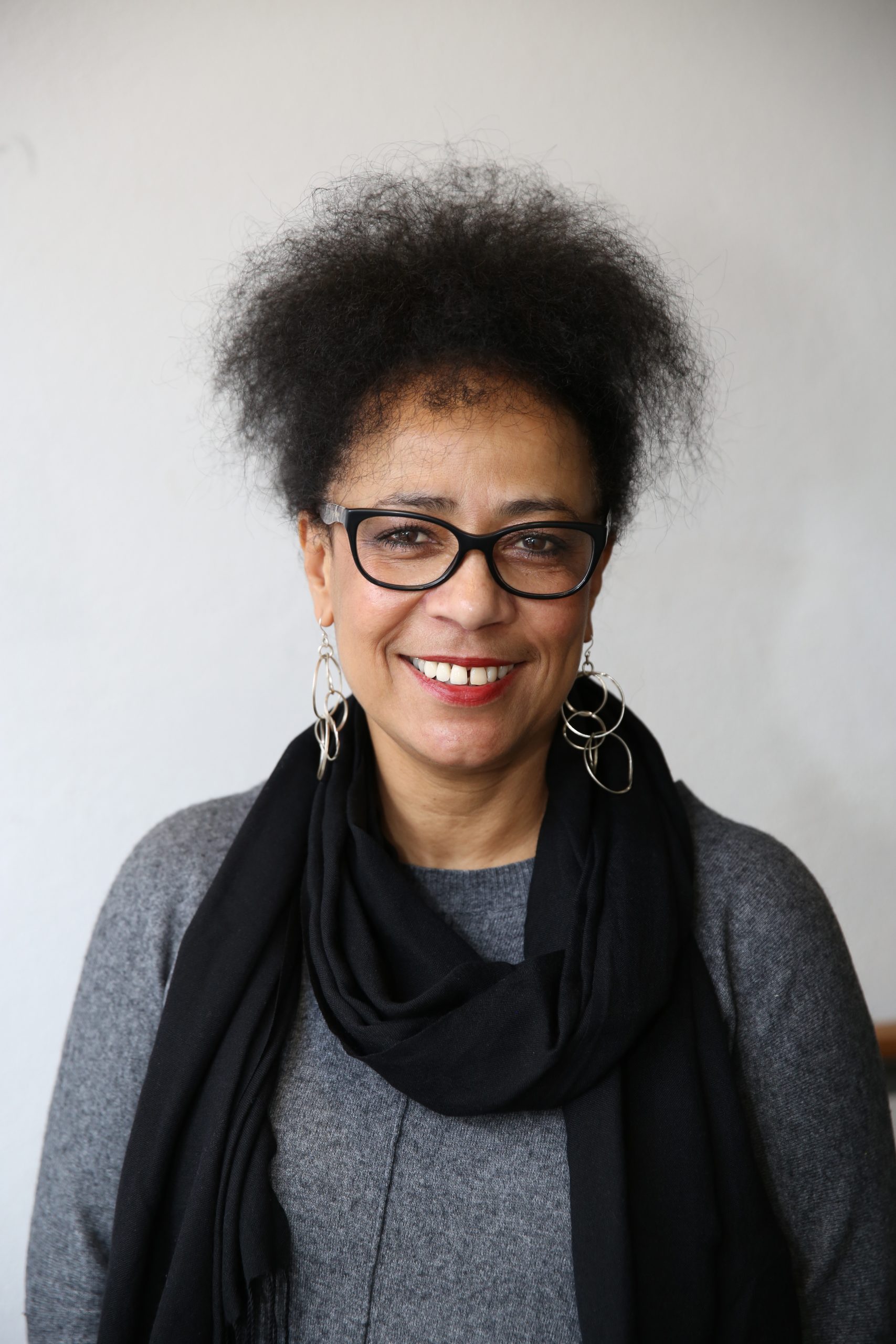 Janine Irons MBE FRSA is the co-founder and Chief Executive of Tomorrow’s Warriors.

Tomorrow’s Warriors is a National Portfolio Organisation of Arts Council England, and PRS Foundation Talent Development Partner which she leads with Gary Crosby OBE, the organisation’s artistic director and award-winning jazz educator, bandleader, double bassist and awardee of the Queen’s Medal for Music 2018.

Through her work at Tomorrow’s Warriors she makes a significant and recognised contribution to increasing and improving the cultural life of the UK and diversity in the arts sector.

I am Janine Irons MBE and I am the co-founder and chief executive of Tomorrow’s Warriors, an award winning organisation specialising in Jazz that offers professional development and young musicians ages 11-25. We also work with professional jazz artists and other creatives to produce exciting, innovative and iconic music projects that tour nationally and internationally. I am also the founder of Dune Records, a small Jazz organisation that achieved two Mercury nominations in its short life.

I am of mixed heritage, half French (mother) and half Jamaican (father), and was born and grew up in Harrow, northwest London. I studied piano between the ages of seven and sixteen, and I also did ballet and athletics. I was always encouraged by my parents to pursue artistic interests. After studying contemporary dance and completing the first year of a degree at Trinity Laban, I moved on to a career, first of all in music at Boosey and Hawkes music publishers, and then in the City of London within the sector of international banking, before finally creating the career that I have now.

I did plan a career, but it is not the one that I have ended up doing. There have many phases. First I was going to be a classical concert pianist, then a contemporary dancer, then a banker or rather working in banking, and then a jazz photographer.

It was through the jazz photography that I ended up doing what I do now, which is when I met my partner, Gary Crosby. Gary inspired me to actually do what I loved doing, because at that time I was working in the City of London in International banking and hated it. The arts had always part of my career, and my life, and taking up photography is what lead me into Jazz.

I was inspired by Gary to leave the city and do something that I actually really enjoyed doing, which was photography and being around musicians.

However, my photographic career was very short lived when I very quickly realised that Jazz musicians generally do not have a lot of money, and do not have money to pay for photographs. So from initially supporting Gary in his work, whether it was through photography, or writing press releases, I then began to move into artist management, being a booking agent, a bus driver, you name it, everything apart from playing the music.

I have come in a round about way to where I am now, and yet here I am, heading up a music company and charity, and supporting other people to achieve success and their creative dreams and, to support musical excellence.

My challenges have always been where I felt barriers were being put in my way. In the city, the glass ceiling was unavoidable, and ultimately became the reason that I left that environment. As a black woman especially, that ceiling was set very low, and as much as I tried to push against it, it was immovable. My upbringing had taught me that if you work hard and you are loyal, and trustworthy, all these great things, you will be treated fairly and be able to progress. However, that turned out to be completely untrue, and it was a big shock at the time. I have always had a strong work ethic and I was also happy to work hard, but the excuses constantly being made as to why I would not get promoted or why I would not get the pay rise that everyone else had got began to wear thin. Meeting Gary made me wake up to a truth that I had tried to deny to myself, that racism was very very key in the situation.

This change, though necessary, brought its own challenges. Being accepted within my sector from other musicians, particularly as a woman and coming from outside the profession was something I had to work hard for. There were also the financial challenges of setting up a company, with lots of ambition to do great things, but with not all the money to do it bar our personal resources. We overcame this by getting funded by the Arts Council, which helped to take quite a big step forward as an National Portfolio Organisation. There were also the continual challenges of credibility as a black-led organisation, which even now, after twenty-eight years and about 60 awards, we still have to face. From this, one of the biggest challenges to date is fighting imposter syndrome. It is something that I do not think I will ever overcome.

Becoming a mother was a really big challenge, especially when the two principles in the business are partners. The dynamic of being co-directors and spouses is a challenge in itself. All the way up to having my daughter I was working, even in hospital and when I first came out. Trying to juggle being wife, manager, director and still touring and booking for other acts was a lot to navigate. It was exhausting. It was a huge challenge to give enough time to all these roles, while working for one’s self. There is a fine line between the personal and business, and it is difficult to maintain. Yet we have succeeded, the company and my personal relationships continue.

My biggest personal achievement was becoming a mum despite fears that I had left it too late. Becoming Mum and growing a child is massive achievement, and being a working mum is an achievement in itself.

The achievement that I am also really proud of is when I received my MBE. It was a proud moment both for me, and my family, especially my dad. He was part of the Windrush generation, having actually arrived on the Empire Windrush, and so for him that public recognition of my achievement was like his pay off for all that he had done to nurture and provide for us.

I enjoyed that acknowledgement because as an artist manager or agent there is not always thanks. Everything that I have done has been on instinct. There was a low expectation of me at school, and I did not got through the channel of university, so to be given an MBE for services to the music industry was definitely an achievement.

What one thing do you believe has been a major factor in achieving your success?

Sheer grit. A refusal to take no for an answer. And daring to dream. When people doubt and say it is impossible, do not listen to that person. One must also fight against the negativity that sits inside one’s self and which questions worthiness and capability. The devil that often sits on one’s shoulder must be pushed away.

Mentoring is really great, and I would have loved to have a solid mentor. Val Wilmer was a mentor for me when I was starting out doing photography and she really encouraged me and made me feel like I could actually do this job, take good pictures and that I had a chance. This validation was important at a time when I did not know many people and was working in a very competitive environment. Having someone with experience was really helpful. Personally, I have been a mentor informally.

I do not like the idea of quotas specifically for Gender Parity, because we will always be told that we are only there ‘because you are a woman’. But I do believe in recognising merit and talent and that opportunities need to be opened up for under-represented groups to progress, and that parity is needed in pay and representation. There is legislation already in place for those who do not follow the law for equal pay or equal representation, but there needs to be more application of these laws.

Ultimately it mostly boils down to economics and finance. The structures and institutions that enable this inequality to continue will take notice when it starts to hit them in the pocket and when it becomes bad for business. It is not a question of acting on moral grounds or changes would have already been made.

In our world of music and festivals, there is money out there to put women on as main acts, but such music bodies will often only make a few changes at the peripheries. In order to truly initiate change, there must be funding penalties rather than rewards. It removes the excuse that actions towards equality can only be made while money is being provided, and rewards those who make positive changes integral to their practise and structures.

Do not go into Jazz. Do pop music.

My next challenge is fundraising to secure the future of the company. We have big ambitions to grow the programme and to support more young artists and to build our NU Civilisation Orchestra, all of which requires a lot of money. I would also like us to try to be less reliant on public money, as this is becoming scarcer, while at the same time competition for funds from trust and foundations is increasing all the time. We need to explore other options.

I would like to build the company so that it is sustainable and stays true the mission and vision that we have worked hard to create and advocate. I do not want all to end when Gary and I retire. Tomorrow’s Warriors needs to live beyond us, so finding a successor is the next challenge.

And finally, for me, I would like to achieve my maternity leave.