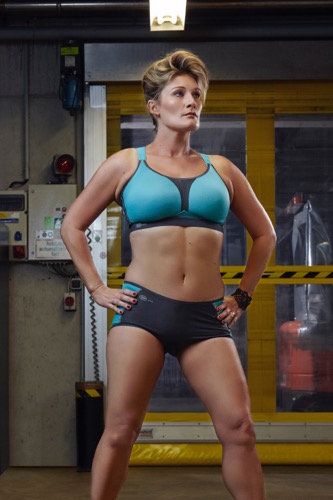 She works in marketing and is a marathon runner.

How did you find out that you had the BRAC gene?

My mother was diagnosed with breast cancer and amazingly she made a full recovery.

When you receive the news, it is a horrible, horrible shock and puts you in a very low place for quite a while.

It was 18 months after I was diagnosed that I had the surgery, due to a combination of finding the right option, right surgeon and plucking up the courage!

The support I’ve received has been amazing and I truly couldn’t have got through it without it. My husband and little girls were brilliant, as were my colleagues and I had so much support from my company to take the time off work that I need before, during and after my operations.

The support from the National Hereditary Breast Cancer Helpline was the most important thing of all. To be able to talk to someone who had pioneered the way for women like me to have the surgery, and who understood all my worries and concerns was a great help, and the social media sites the charity runs gave me access to so many women out there that I never even knew existed who were going through the same thing as me! The value of social media networks cannot be underestimated.

I also had huge support from people at my running club. They were amazing in a way I never expected. I thought we were a group of people who just run together but no, we really have each other’s backs!

Ten weeks after my surgery I ran my first park run again, and they all ran with me in tutus! It was the toughest run I’ve ever done, but it helped me realise I was on the road to recovery, with great people by my side.

Having had the support I did from the NHBCH, I wanted to give something back so I became an active fundraiser for the charity.

In 2015, four months before my operation I ran my first marathon in London raising over £7,000. I had a goal that to prove to myself I was completely back to full fitness, and over all my surgery I would run the London marathon again.

Sure enough, four months after my last operation in 2017, I ran it again raising £5,000 for the charity.

I cried at the finish line as I ran it the same time as two years before. It meant I was back to who I was before (although I feel mentally and physically even stronger!)

The surgery was all behind me and had had no long-term effect on my body.

I have stayed in touch with Wendy and have always had the charity’s best interests at heart. In July 2017, I became a trustee for the charity.

So when I heard there was an opportunity to raise even more awareness for the charity and hereditary genes, I was the first to raise my hand!

Despite having run two marathons, for me to pose in my underwear at the age of 43, having had a double mastectomy and two further reconstruction operations, was the scariest thing ever! But I knew it would make me feel so strong and powerful if I could pluck up the courage to do it. After all I’ve been through, sometimes these days I think I am wonder woman! I have to remind myself I am just Lucinda from Milton Keynes!

It was a wonderful thing for her to do. For a woman in a public eye as much as she is to reveal what she had done to her body to reduce the risk of cancer was very powerful. Anything that raises awareness of hereditary genes is always going to get my vote!

Awareness and to help women build the confidence to go and be tested for a gene mutation if they have a history of breast or ovarian cancer in their families. The awareness of hereditary genes has really increased over the past few years, but if women knew that actually if it’s okay if you do have the gene, they would be more confident about being tested. It’s a very, very scary thing to do, and I know I certainly buried my head in the sand for quite a while…

I think it would be great to see a national campaign about the importance of knowing your family history, which is why we are driving forward with the ‘make one person aware’ campaign through the charity.

How can other people worried about the BRCA genes get the help and support they need? And do you have any advice for anyone going through a similar thing?

These days, us women who have been through preventative surgery are everywhere! You can find us through the National Hereditary Breast Cancer Helpline, or Googling ‘BRCA support’.

Talking to peers, and medical experts, is the most important thing you can do to help get to the decision that is right for you. And also to see how strong you are when you come out the other side – just look the power of the women in underwear, after all they have been through, in this campaign!