0
You have 0 items in your cart
Go To Shopping
Home > Rising Star Awards > What Happened Next - Rising Stars > Rising Stars: What happened next for Coleen Mensa 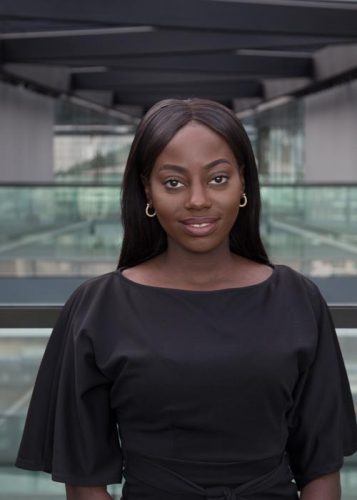 We spoke with Coleen Mensa, who won a 2018 Rising Star Award in Law.

Coleen is a trainee solicitor at one of the “Big 4” accountancy firms Ernst & Young (EY).

Coleen is passionate about self-development and career progression. Above all, her interests lie in helping others, who, like herself come from humble beginnings to reach their full potential.

In 2015, Coleen started began sharing her journey of navigating the legal profession on popular website Lawcareers.Net. This led to her winning the Legal Cheek award for “Best use of Social Media for her videos. Coleen is also a frequent writer for the Guardian predominantly focusing on advice for getting into law.

Coleen is the co-founder of Power up, an initiative designed to help individuals get into their chosen career paths which is sponsored by Google and Gaucho.

Coleen was also named as an inspirational woman by Ernst & Young and has a video on the EY website about her journey.
Coleen often gives up her time to mentor others and is a regular public speaker. She has spoken at a variety of universities, schools, FTSE 250 companies and motivational events.

I honestly do not think words will do my feelings justice but when I found out I had won, my feelings were a mixture of being ecstatic, humbled and in slight disbelief. It’s one thing to feel you deserve an award but definitely a surreal feeling when you find out other people think the same!

When I won the award, my company EY publicised the news on their social media outlet and on their intranets. I was also featured on EY Black Networks global newsletter!

I have since gone on to be named one of the Top 50 future leaders by the Financial Times and I am a finalist in the UK Diversity Legal Awards – (winners will be announced in November).

I have spoken at many other events and will be speaking at Thomson Reuters and Huckletree this month.

I truly believe in not kicking the ladder down and so I have nominated a whole heap of people for various awards in the last months!

Be honest and have confidence in the good work you are doing. It is sometimes hard to talk about ourselves and what we do but try to make sure that what is you is clearly communicated.

At every stage of the awards process use it as an opportunity to network! Sometimes, it’s great to network laterally and meet other like-minded females. The people I met whilst going through the process are incredible and I have grown my network substantially.

Finally, if it is not too late nominate as many as you can for the award.

My first tip would be to not forget to be yourself at all times. Do not underestimate the importance that your uniqueness can bring to an organisation. Remember that by you being yourself, you may be unknowingly granting someone else the permission to do the same!

Secondly, have an incredible work ethic as it will often set you apart from others!

Finally, speak up and contribute in any way you can. If you think you can add value in some way then be sure to do so. It does not matter how small the contribution is but always be the positive change you want to see.

Alison is the Digital Content Editor for WeAreTheCity. She has a BA Honours degree in Journalism and History from the University of Portsmouth. She has previously worked in the marketing sector and in a copywriting role. Alison’s other passions and hobbies include writing, blogging and travelling.
Previous PostFirst UK photography exhibition captures Saturday Girls at work across BritainNext PostVacancy Spotlight: Credit Suisse Real Returns™ 2019