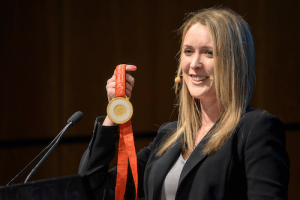 Danielle’s story is all about breaking barriers.

After becoming disabled as a teenager, Danielle realised that even in adversity we have a choice. Choose to let the things outside your control defeat you, or choose to control your response to it.

Taking up archery on her fifteenth birthday, Danielle made the Great Britain team three years later, jumping straight in as world number 1. She hung onto that position for her entire career. Danielle is a five time World Champion and 2 time Paralympic gold medallist, winning gold in Beijing 2008 and retaining her title on home soil in London 2012. She also became the first disabled person to represent England as an able-bodied competitor at the Commonwealth Games, where she won gold.

Danielle now works as a keynote speaker, trainer and coach. She specialises in helping others unlock their potential, break through barriers and achieve more. With over a decade of experience in public speaking, Danielle also teaches people how to deliver awesome speeches with big impact messages and captivates their audience.

Working with young people is an important social aspect to what Danielle does and she is passionate about helping young people develop strong foundations for success. Be Your Best Self, a children’s self-development book she has co-authored with nine year old Nathan Kai, was being released in October 2019.

It’s been an exciting journey, but not a straightforward one. My background is in elite sport – I had a very successful career as a Paralympic archer, winning golds in Beijing 2008 and London 2012. I also became the first disabled person to represent England as an able-bodied athlete at the Commonwealth Games, winning another gold there. Unfortunately my retirement from sport was out of my hands with the new classification rules making my disability ineligible to compete so I had to think up a new career plan pretty quickly. As an athlete I’d learned an incredible amount about performance and, as a woman and a person with a disability, I was fascinated with the impact this had on our capacity to succeed and the barriers that hinder progress. I set up my own speaking, training and coaching business to help people unlock their potential, overcome barriers and achieve more.

I started to… The plan was to become a lawyer but whilst I was at University my archery career really took off and I had a big decision to make. Did I go for that very stable career of law? Or did I choose sport, which is a very unpredictable, often lonely and sometimes cruel lifestyle? It was an easy decision. I chose sport because I was passionate about it and I was good at it. I loved travelling the world, meeting new people, experiencing new cultures and competing. That rush of adrenaline when you’re in the arena, knowing that you can’t make any mistakes if you want to come away with the win is an amazing feeling. Leaving sport was a decision that was out of my hands and I had no transition plan at all. I made it up as I went along, found what worked and what didn’t and created a career for myself that I was as passionate about as sport.

Absolutely. Life doesn’t come without challenges, and I’ve experienced my fair share. Becoming disabled as a teenager, breaking down other people’s perceptions as well as my own to make it onto the able-bodied team, being forced into retirement way too soon have all been tough. On the business side, not knowing the first thing about business when I first started was a big challenge and I really had to learn on my feet.

The gold medal on home soil in 2012 is pretty hard to beat on the sporting front. In business, I recently released Be Your Best Self, a children’s self-development book that I co-authored with nine-year-old Nathan Kai. I love being able to put back and helping younger people develop success skills and unlock their potential is really important to me.

My family. I am very lucky to have the best support team who believe in me and my dreams. Whenever I experience a setback they are there to help me, as well as to share my successes.

It’s a necessity. I’ve been mentored – this is an integral part of sports performance and it made sense to apply the same approach to business. I want to surround myself with people who know far more than myself and who can guide and support me to become better. I also mentor others now, helping them become better at public speaking as well as developing success skills. It’s the most rewarding job in the world.

Better education. Removing gender expecations around things like roles, responsibilities and interests is super important. The stereotypes that exist are limiting for both men and women in so many ways and we need to get rid of them.

Don’t compare yourself to others. You are the only person who gets to define your self-worth and it is measured by the value you have to offer, the improvements you have been making, and the great qualities you possess.

Following a lengthy research project into gender barriers, my next challenge is to publish a book which offers inspiration and strategies to help women overcome both real and self-imposed barriers. Longer term I’m looking forward to becoming an International Speaker.

0Shares
Inspirational WomanInspirational women in sport
Previous PostAdventure Psychology: It’s time to turn surviving into thrivingNext PostRunning a successful organisation in turbulent times – why board diversity could be the key