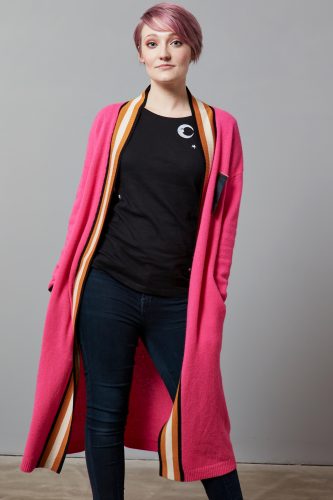 Jacynth Bassett is the founder of the-Bias-Cut.com – the first pro-age online independent fashion boutique – and the movement Ageism Is Never In Style.

Named as an “Ageism-Fighting Trailblazer” by Global Health Ageing, Jacynth is swiftly becoming recognised as one of the leading pioneers of style at every age. She has written on the topic for various leading national publications, such as The Guardian, contributed the chapter on grown up style for an internationally published book, and is the monthly style columnist for several 40+ online platforms. She is also often invited to speak on radio, podcasts and panels, including chairing the “Fashion Fades, Only Style Remains” talk for the (B)old Festival 2018 at the South Bank Centre.

I founded the-Bias-Cut.com – the first pro-age online independent fashion boutique –after growing saddened and frustrated at seeing women, like my mum, being treated as invisible or irrelevant in the eyes of the Fashion Industry, largely due to their age.

I developed the business straight out of graduating from university, having had no prior experience in fashion or retail. I actually studied Law at Cambridge and, from age 13, had intended to become a barrister. But I realised it wasn’t for me, and wanted to work in an industry I really loved. The Fashion Industry had always been a passion of mine and it was whilst I was at university that I came up with the idea for the-Bias-Cut.com.

After thorough market research, I launched the-Bias-Cut.com in March 2016, having started a blog nine months earlier to gain a following and start conversation. I began with just 4 small British labels, and funded the business entirely with my very minimal savings. It really was a shoestring budget, so I built, developed and ran everything myself – from the website, to buying, to the marketing.

Since launch we have continued to grow organically and 3 years later we now have over 30 labels – a mixture of known and unknown (I really like to support up and coming designers) – and a global customer base. We also recently launched my own eponymous label which had always been a goal.

My overall mission is to fight ageism within the Fashion Industry so, alongside the-Bias-Cut.com, I launched the movement ‘Ageism Is Never In Style’ in August 2016 to discuss and challenge diversity in the Fashion Industry. I am also the monthly style writer for several leading 40+ websites, and regularly guest write for others and speak on the topic of ageless style on panels, podcasts and radios.

I didn’t sit down per se, but I mentally planned it in a lot of detail and had a very visual picture in my mind of what I wanted to achieve. From the age of 13 I had a clear route: go to Cambridge, study law and then to become a barrister. It was my sole focus and I was extremely determined.

Everything went to plan, until I realised at university I didn’t want to be a lawyer! And that was a curveball. It did destabilise me for a period, but once I started to realise what I was really passionate about I started to get back on track.

That said, it made me realise that, whilst it’s good to have visions and goals as they drive you, it’s not wise to plan every small detail because you never know what happens and things will change. And that can be a good thing. So whilst I do still have a (different) mental plan, I try to be more flexible and open minded with it.

Of course, hasn’t everyone?! Even though I had a thorough understanding of and passion for the Fashion Industry, entering into it with no prior experience or contacts in was though. And on top of that I only had my very small minimal savings to get me off the ground. So I really had to carve a space for me in the Industry, graft and invest time into networking.

But the biggest challenge has been coping my mental health. I’ve had anxiety and depression since a teenager, and I’m my own worst critic, so I find it very hard to give myself a break. I’ve always been determined not to allow my mental health to get in the way but, whilst that can be good in some ways, it has stopped me from being kind to myself which can have worse repercussions – both personally and professionally. So the biggest challenge has been accepting that, and trying to be more caring and forgiving of myself.

I think it’s fantastic as it’s really important to surround yourself with objective people, who have your best interests at heart and believe in you, but will also give you tough love when you need it!

I have two mentors – very different with expertise in different areas – but they have been equally incredibly supportive and given me the confidence to keep going when I’ve been doubting myself. They’ve also introduced me to great contacts, have been ideal for bouncing ideas off, and we’ve got to know each other on a more personal level too.

I do highly recommend having a mentor, but I also think it’s very important to find the right person. You need to click and have a mutual understanding of each other. I met my first mentor through my old school network’s mentoring scheme, and the second after winning a mentorship competition with the UKFT. In both cases, a lot of time and attention was given to pairing together the right people which made a big difference.

Greater focus on gender issues and equality in the class room from a young age – both with girls and boys. I went to an all-girls school from 4-18, and then all women’s college at Cambridge, Murray Edwards. So I was very fortunate grow up in an atmosphere where I was made to feel my opportunities were limitless. But lots of girls didn’t have the same experience growing up.

Moreover, I’ve been disturbed at times to hear stories from male friends (the majority of whom went to all-boys schools) regarding what they were (or weren’t) taught about gender disparity in the classroom. Some have even been completely oblivious to it, convinced it isn’t even an issue anymore. Or have been taught very misleading or false reasons for the disparities such as the pay gap.

Education is the fundamental key to all change, and it needs to start as early as possible. And it’s just as important to teach boys about it as it is for girls.

Admitting you need help and asking for it isn’t a weakness, it’s a strength.

For the-Bias-Cut.com, the next challenge is to grow our overall presence. As well as building on the strong foundations we’ve built in the UK, we’re looking to grow more internationally, particularly in the US and Europe as we already have a following and customers there, and I have strong influencer connections.

I also recently founded a 50+ Industry Activists group called Advocates For Ageing, comprised of leading individuals who are challenging ageism in their respective fields, and we have lots of ideas in the works on how we can move the anti-ageism narrative forwards.

What are the biggest misconceptions about the fashion industry?

I’d say there are two:

What’s the most enjoyable part of what you do?

Since day one, the most rewarding thing is hearing from a customer about how our clothes and mission have helped her grow in confidence, feel special, and brought her joy.

Previous PostNo such thing as spare timeNext PostImposter Syndrome survey – can you help?