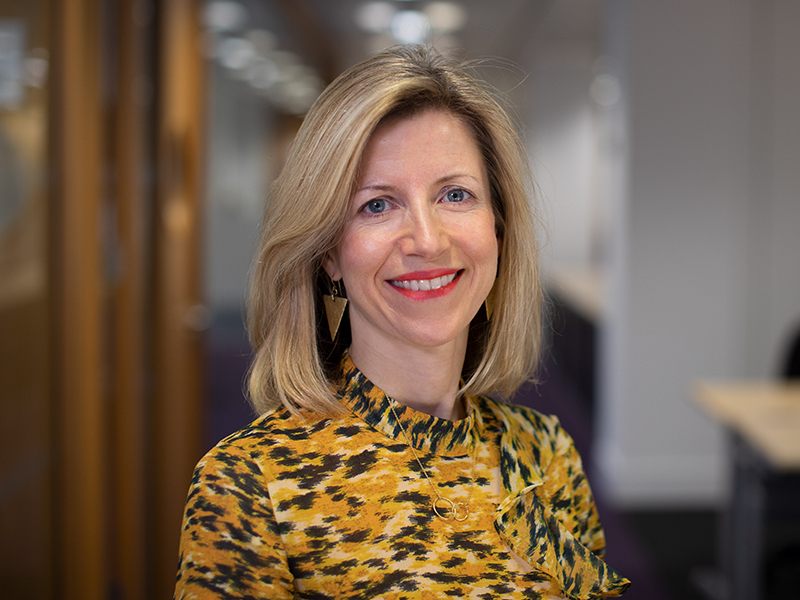 I’m the CEO at Asthma + Lung UK, the nation’s lung charity fighting for everyone’s right to breathe. I’ve been CEO at the charity for about two years now, recently overseeing the charity’s rebrand from Asthma UK and the British Lung Foundation to Asthma + Lung UK. Before this I worked at Cancer Research UK for 15 years, joining as a Policy Officer and working my way to Executive Director of Communications, Policy and Information.  I have worked in government – I was seconded to the Department of Health to write a previous national cancer strategy – and other not-for-profits. I also have four small children who keep me busy!

No, not really. My approach to my career has been to find interesting jobs where I could make a positive impact. As I took on more senior roles, I found I enjoyed managing people and leading campaigns. I grew with confidence and felt inspired to think about leadership roles.

Yes, I’ve definitely had ups and downs along the way. There have been times I’ve felt frustrated at the pace of change in an organisation, but I’ve learnt it’s important to keep a sense of perspective, to have other interests outside of work so it doesn’t become all-consuming. I have taken on several trustee and non-exec roles over the years, which has been fantastic to broaden horizons and direct energy to different causes.

The juggling of work and family is an ongoing challenge, but I think it’s now much easier to bring your whole self to work and I try to model that at Asthma + Lung UK – I want people to be able to give their best at work while managing other commitments and interests in life.

I’ve felt proud of some of the campaigns I’ve worked on, for example successfully campaigning for the indoor smoking ban in the mid 2000s. More recently, re-branding the two lung charities and developing a new strategy to transform lung health has been incredibly rewarding. People with lung conditions like asthma and COPD often get a very poor deal. We’re on a mission to change that and I know uniting as the nation’s lung charity will help us do that.

Keeping a positive, can-do attitude and embracing change. Particularly when trying to influence governments to drive policy change and campaign on health issues, being resilient and retaining a willingness to be flexible has been important. It’s the same within organisations – they always change. Being open to that is important.

I am a big fan. I have enjoyed mentoring and being mentored. I’ve learnt over the years that it’s important to be clear at the outset what you both want to get out of it and setting an initial time limit – for example 6 months – can be helpful to keep it really focused.

50% of the UK’s organisations and institutions are headed by women. Senior role models are so important and I have experienced different kinds of leadership – more embracing of flexible approaches to work whilst still driving incredible impact – with women at the helm.

There have been times I’ve found it challenging having a senior leadership role while bringing up young children, and wondering if it’s the best thing for me and my family. Someone once said that I’d work and worry the same amount about any job I had so I may as well take the senior leadership job. That was good advice – don’t talk yourself out of jobs just because you have other commitments.

Asthma + Lung UK recently launched its ambitious new strategy, with the aim of cutting lung deaths by 20% by 2027. At the heart of the strategy is a goal to de-stigmatise lung disease and tackle the injustice that so many get poor care. I want to see our strategy come to fruition. In the longer term, I’d like to keep having a positive impact on society.

What is the biggest lesson you’ve learnt in your career?

If you believe in something and the case stacks up, be persistent. It sometimes takes years and a lot of blood, sweat, and tears to drive a change, but if you’re passionate and persistent, more often than not you can drive that change and win others round.

If you could wave a magic wand, what’s the one wish you’d make?

Accelerate action on climate change. We see the effects of air pollution on people’s lungs on a daily basis, with a close link to climate change, and it scares me. Future generations will ask what we did to protect the planet and tackle climate change; I wish there’d be bolder, quicker action.