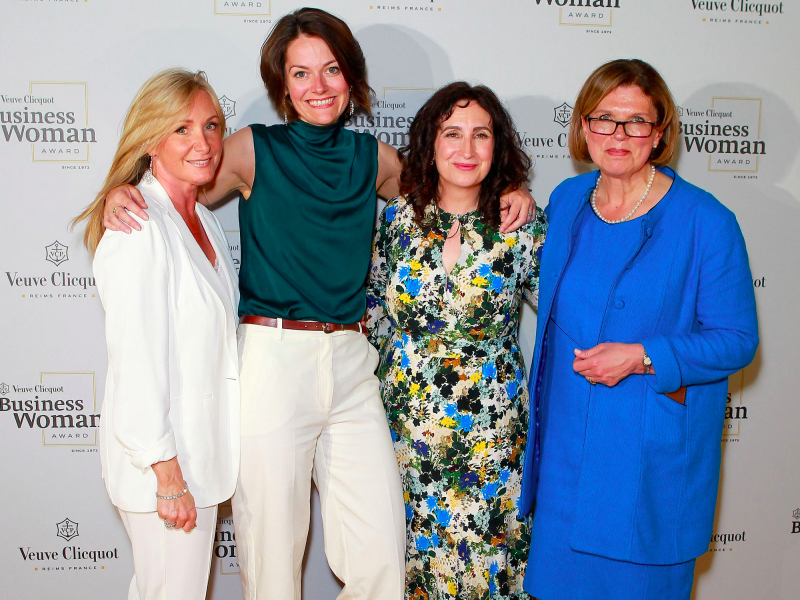 Whitfield was announced as the winner of the 2019 Veuve Clicquote Business Woman Awards. As the first female CEO of a British food retailer, Jo oversees the day-to-day operations of Co-op’s food business, part of the Co-operative Group.

The judging panel outlined Jo’s role in boosting profits and sales for the Co-op’s retail arm and achieving over four years of like-for-like growth. Additionally, she has led on innovative trials to take Co-op food online – trialling delivery methods with Deliveroo and AI robots, boosting sales in test stores – as well as her work in making stores more sustainable.

Jo has established a new not-for-profit women’s network, Grocery Girls. It aims to nurture talent, widen people’s networks and develop new business partnerships to aid this. It has over 500 senior members and aims to attract female leaders and those who aspire to a more senior role from all grocery businesses, including supermarkets, manufacturers and their suppliers. It offers business women a forum to network and meet like-minded individuals and share best practice. The organisation aims to help change attitudes, represent women as visible role models wanting to talk about their experiences, as well as grow and retain talented women within the grocery industry.

Speaking about her award, Whitfield said, “This is such a prestigious award and I am genuinely thrilled to have won.”

“It is an amazing way to champion the success of business women worldwide.”

“There are still opportunities needed in many workplaces to match the diversity of modern society.”

“That is why I felt it important to launch a new network, Grocery Girls, to develop and foster female talent in the Grocery sector.”

Also on the night, Sherry Coutu CBE, Founder and CEO of Founders4Schools was awarded the Veuve Clicquot Social Purpose Award, which honours female leaders whose organisations are championing social enterprises. Sherry’s outstanding efforts to connect young people with successful businesses and therefore helping them make informed decisions about their future, was one of the key achievements outlined by the judging panel.

Coutu said, “I am thrilled to receive the Social Purpose Award from Veuve Clicquot for my work at Founders4schools and Workfinder.”

“It has been such an immense privilege to work with amazing colleagues and friends to help bring about change and I love seeing what happens when our technologies facilitate communities acting together on issues they care about.”

Cybersecurity entrepreneur Poppy Gustafsson, CEO of Darktrace, was announced as the winner of the Veuve Clicquot New Generation Award; while Chrissie Rucker OBE, Founder of The White Company, this year received a Veuve Clicquot Tribute Award, in recognition of how she has built and grown her company over the past 25 years. The Veuve Clicquot Tribute Award celebrates women who have not only shown exceptional success in their careers, but through their work, inspire the next generation of female trailblazers. It reflects the achievements of Madame Clicquot herself who, as one of the world’s first businesswomen, continues to influence other female leaders through her legacy today.

On receiving the award, Rucker commented, “I remember being so excited to be one of the youngest finalists many years ago, so it’s incredibly special to now be receiving this Tribute Award, in this our 25thAnniversary year.”

“I have always thought of the Veuve Clicquot Business Woman Awards as being one of the most prestigious (almost the Oscars for women in business!).”

“It’s wonderful that it celebrates the breadth of our new up-and-coming stars as well as the more established businesses.”

“It has taken a massive team effort to get where we are today, I cannot thank my incredible team both of today and over the years enough, for making it all happen.”

“I hope we can all play a small part in helping to inspire the next generation of future female leaders, just as Madame Clicquot has done for so many years.”

The achievements of this years’ runners-up – Alex Mahon, CEO, Channel 4; Susie Ma, Founder, Tropic Skincare and Cecilia Crossley, Founder, From Babies with Love – were also highlighted and celebrated at an awards ceremony held at the Design Museum in Central London.

Since 1972, the awards have recognised women pioneering different aspects of business today and celebrates those who share the same qualities as Madame Clicquot, an original trailblazer: her enterprising spirit, as well as her courage and the determination necessary to accomplish her business goals.

Alison is the Digital Content Editor for WeAreTheCity. She has a BA Honours degree in Journalism and History from the University of Portsmouth. She has previously worked in the marketing sector and in a copywriting role. Alison’s other passions and hobbies include writing, blogging and travelling.
Previous PostInspirational Woman: Carly Taylor | Co-Founder, Real HandfulNext PostWealth and wellbeing | Getting on top of our finances