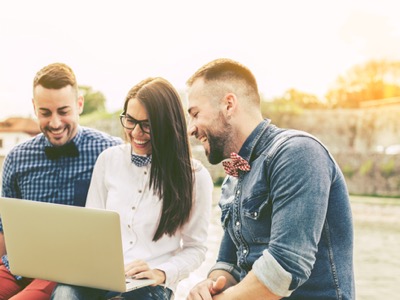 Whalar is an influencer marketing platform on a mission to liberate the creative voice. 60 per cent of the influencers on the Whalar platform are women. Chelsea Carter, Head of Content at Whalar told us more about why women are leading the way at Whalar.

Influencer marketing is still a relatively new area of marketing but it’s an extremely fast growing industry and women are at the forefront. Our youngest influencer on our platform is 18 and our oldest is 70, and the majority are women. We like to think of our influencers as creators with influence, because their influence and value comes in their creativity. Women have always been creative, but what technology has done is to provide that outlet for their creativity. It has given them a platform, nurtured their creativity and allowed it to grow.

Influencer marketing is one of the most exciting creative industries for women to be in, and through Whalar our creators with influence are able to work alongside some of the most recognisable brands in the world like UNICEF, Adidas, La Mer and Apple. Not so long ago, this would have been unthinkable. Marketing was about promotion, deciding on features and unleashing this on the world, whereas now it’s about collaboration and co-creation of value. We’re not talking about celebrities as influencers but real people who have something interesting to contribute to the conversation.  In the digital age, the value comes in a real person creating real content in real time. It’s authentic, and that’s what makes it so enticing for brands, consumers and for the influencers themselves.

Creators with influence are celebrated for their originality, for their diversity and for their unique story and I think this is hugely appealing to women. It’s not about how much you earn, where you live, your age or any other factor that used to be the benchmark for success, it’s about how creative you are. That’s the marker for success. And Whalar is the connector between these influencers and the brands that want to work with them.

A recent Whalar campaign with River Island is a brilliant example of this. The #labelsareforclothes campaign was all about mocking outdated and irrelevant labels given to people based on their gender, sexual orientation, ethnicity or religion. River Island gave 80 creators from the Whalar platform a t-shirt and asked them to write their own positive, tongue in cheek label after ‘100%’. Creator with influence @ellessechar was ‘100 per cent unapologetic’ and @itsmekellieb was ‘100 per cent free’. This campaign highlights just how far we have come in our mission to democratise creativity, taking power from a chosen few to the many. The campaign is ongoing but has reached over six million people so far and has generated over 300,000 likes.

Women are also really attracted to the influencer marketing industry for its flexibility. Technology is fuelling creativity and championing diversity but it’s also challenging our old beliefs about how and why we work. As more of us seek agile and flexible working, the old 9-5 rarely exists anymore, and if it does women don’t want it at the price of their creativity. It’s no longer a choice between the sensible and the creative, women can have both. It’s exciting to think that technology is going to play its part in creating greater opportunity for women, championing gender equality and heralding a new wave of career options for women.

As for Whalar itself, we started out in 2016 but are already making big waves in the sector. With offices in New York, London and LA, we’re proud to have a really strong team of women such as an all-female team leading the London office and an amazing board that includes Chloe Gottlieb of R/GA and media executive Andrea Wong. As more women realise the power and opportunity of influencer marketing, we hope to see even more females joining the ranks, as creators with influence, as collaborators and as leaders.