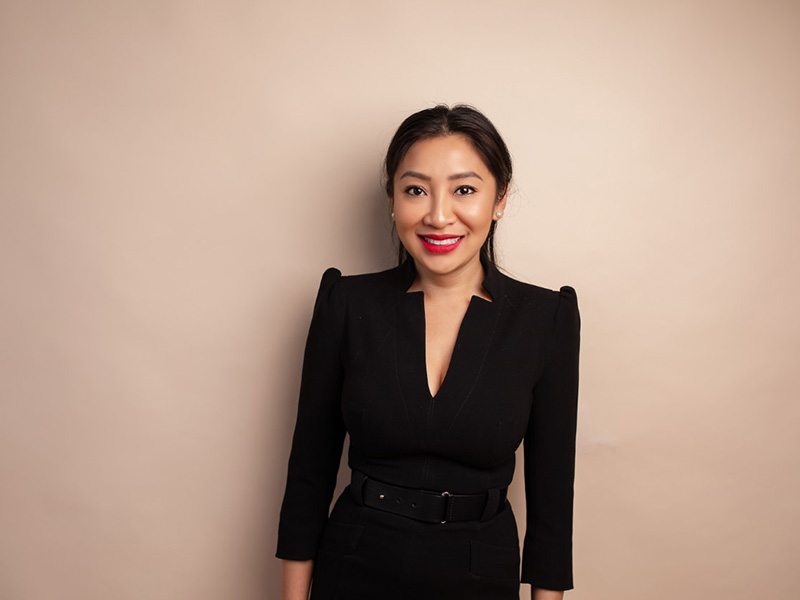 Dr. Sheila is a multi-award winning cosmetic injector and dentist, holding a first-class honours degree in Biomedical Sciences before going on to graduate as a dentist from King’s College London.

She has also been awarded a Masters in Aesthetic Medicine with distinction from Queen Mary University of London. Sheila is the founder of Mediject, a training academy dedicated to promoting clinical excellence, safety and ethical treatments in injectables, training and mentoring dentists to be able to carry out injectables predictably and safely on their patients. She is a mentor and trainer to dentists in the field of Aesthetic Medicine, and mentors dentists with an interest in facial aesthetics, helping them to incorporate injectables into their daily practice with confidence & predictability. She also guest lectures on the Aesthetic Medicine Masters at Queen Mary.

Having trained over 600 doctors and dentists, and treated more than 15,000 patients, she has recently founded Twique, a medical aesthetics clinic in London, offering her patients the best and safest treatments in aesthetics, looking after their ageing.

Sheila also sits on the Board of directors as Communications director at The British Academy of Cosmetic Dentistry, raising awareness and promoting excellence in ethical cosmetic dentistry across the industry to dentists and patients alike.

I’m Sheila, mum of two girls, Willow (4) and Autumn (3), wife to the kindest, most supportive husband in the world Andy, business partner to one of the hardest working woman in the world, Vy and founder of Mediject. I grew up in Birmingham and eventually moved to London 14 years ago to study dentistry, where I met my best friend, Elle, who showed me the pathway into aesthetic medicine. After graduating as a dentist, I began a career in cosmetic dentistry, where my involvement in The British Academy of Cosmetic Dentistry helped to shape my career, whilst also re-training in Aesthetic Medicine along the way too. Now I train and mentor other dentists who want to do injectables, whilst continuing to see and treat patients. I’ve learnt so much about myself every step of the way, and I’m very much a people person, harnessing every opportunity to explore, create and nurture relationships with people. People intrigue me, and you’ll often find me with a cup of tea (or coffee depending on the time of day) having a chat with someone.

My goals are to inspire and nurture my daughters to grow up with confidence, to speak well and the belief that they are able to achieve anything with the right mindset.

At the age of 10 I sat down and planned out how I would grow up to have my own ice-cream van, I spent a whole day on it, and drew up what my van would look like and the type of ice-cream I would sell. That was my first and only life plan. Being from a Vietnamese family, it was expected I would go to university and be a doctor or a lawyer, but after failing my 2nd year of A-Levels, I missed my opportunity to study Medicine. I was scared and devastated. This wasn’t the first failure however. My first failure was not getting into grammar school, devastating my parents. But failing my A-levels was a huge set-back for me. I didn’t know what to do with that failure, and feeling lost and rejected, I gave up continuing with my A-levels and began to start working instead. For 2 years I modelled and worked in experiential marketing before finally going back to complete my A-levels. I honestly never had a plan, and even now, I don’t have a solid plan, I’ve always known I would be “successful”, because I am always willing to do what it takes. The only planning I ever did was I spent most of my undergraduate years drawing up “revision plans” but never followed any of them through. Looking back, it was a fabulous way to procrastinate. My strategy now is to start, tweak and keep moving forwards.

I have faced numerous failures and as a result of this, the disappointment from my parents was the most challenging aspect of my journey and career. With every failure, I had let my parents down. It meant that everything I chose to do early on in my career was to please and try to “win back” my parent’s love. This had a significant effect on my mental health, and shortly after having my first daughter, suffering from post-natal depression, I didn’t feel worthy, capable or strong enough to be a mother, and I felt constrained between choosing between a career and motherhood. This was when I sought counselling. This was the best decision I have ever made for myself, for my career and for my family.  Juggling motherhood has been challenging, networking and career building almost halted after I had my first daughter because most networking opportunities seem to fall during family time (evenings and weekends) and I found myself constantly deciding between time with my daughters or continuing to build my career. But, most positive thing to come from Covid-19 was the additional time I had with my family, but also, was that it allowed the work place to be more acceptable online, allowing more networking opportunities, and opportunities where I could still be present (e.g. board meetings, conferences) without physically having to be there. In the last 2 years I have been able to balance how I feel about being pulled between family and my career more, focussing on quality time with my family rather than quantity.

I have two, both in the same year, finally achieving my masters with a distinction (after coming close to quitting twice) and setting up my own training academy. As a mother to two young girls juggling my career, new business and parenthood has been wrought with challenges. Stepping into the unknown of setting up my own business was extremely daunting but I am so proud to be able to say that in the first 8 months of trading, the company has single-handedly turned over more than £550k. I’ve always been a hard-worker, but finally doing something for myself, there’s really nothing like it.

My resilience to failure has been a major factor in achieving success. I no longer let it phase me, in fact, my aim is to achieve failure as quickly as possible, to allow me to grow quicker. Its something I instil in both of my daughters on a daily basis, we celebrate our failures daily, and then learn from them.

Mentoring is crucial in personal and professional development, it is one of the best tools and gifts you can give yourself, and one of the most important investments you’ll ever make. Mentors, allow you to achieve your goals quicker, with fewer hiccups and they also open the path to other people who will be helpful in your journey. Most people are likely to achieve their goals if they want it enough, mentors will help us get their faster. I have always had mentors in every stage of my career, and currently have a team of mentors and business coaches around me, to help me see my blind spots. I also mentor other dentists who would like to do what I do.

Celebrate the women and men who show up, speak up and work hard to close the gap on gender parity. Give them the stage to inspire others to do more, be more, and do better. Let their voices be heard, and shine a light on their work.

Sheila, failure is ok, embrace your failures, they make you stronger and better. Don’t be fearful of them but lean into them, run towards them. This is the storm, and when you run into the storm, you’ll be able to overcome anything.

My next challenge is to grow the academy and clinic to a multi-million business, this will allow me to move towards my north star of building orphanages and education centres for children and women in disadvantaged countries. I believe all children and every woman should be given the opportunity to realise their potential, and education is pivotal in this.